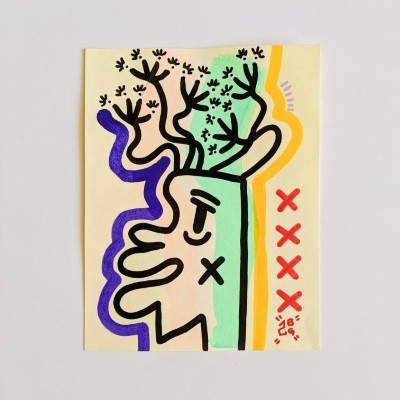 Toronto, ON-based electro-soul artist, Ted Jameson has released his new single, “Something”, which is the follow up to his 2020 single, “Figure It Out“.

“The song for me was a source of therapeutic relief and an anthem to myself and others to keep ya chin up as we are faced with so much adversity and uncertainty; more like a pick me up to a shitty year. I want the song to uplift, inspire, and give people in dark spots of their life some hope that happiness ain’t meant to be chased, but that it’s already there inside you to release. You just gotta take the time to find yourself to let that all happen. No matter how long it takes. ”

“I was working on another song, more along the lines for RnB and funk, and I was looking for samples and beats I could use as I was struggling to write. I came across a post-modern ’80s 808 beat that caught my attention. I was listening to a lot of Dua Lipa and The Weeknd at the time and decided to dive more into what I found and just started to create more and more of the bones to the song.

I felt really good about this song, so I decided to pass off the demo to Mike Rocha. I felt this was really up his alley because he loved dealing with these kinds of sounds and a natural ear for what I wanted to happen with the song. Once it got into his hands, he elevated it to the sound you hear now and something special that we both really enjoyed creating.”

Check out “Something” below, and find out more about Ted via our Five Questions With segment.

I’ve been in the music industry for about 20+ years, playing many venues, shows, and festivals, having some reasonable commercial success in TV and Radio, a 2014 award winner in RnB/Soul for the JLSC (John Lennon Songwriting Contest), and have toured professionally with award-winning Toronto artist and poet, K’naan.

I’m also an avid marathon runner, proud father of an almost 5-year-old, and a lover of Bubble Tea.

Primarily, I’ve tailored to a genre in RnB, Soul, Funk, and Jazz due to the talented company I keep with amongst my band, but I love all types of music. My writing style can vary, from taking simple words from a poem to translate to song, or vibing off a groove and pocket that has been slowly built from the ground up.

Usually for me, it always starts on the guitar and builds from there. If a song can sound good acoustically to the ears listening, then everything else falls into place easily. General lyrics would come in shortly after to get the feel of the song, and then instrumentals to top it all off. Either way, I’m pretty flexible in terms of the songwriting process.

I’ve been doing A LOT of writing during the pandemic. I draw on inspiration from a lot of our daily events now since it’s such a heavy thing to see and feel these days.

I’ve been learning quite a bit more on my craft of the guitar to learn different styles and techniques to keep things interesting and delved myself into different music genres I usually wouldn’t listen to or song write to; that being, dance, country, and pop. Which is kind of how I got into writing “Something”, which was completely by accident.

Running and exercise are more of a norm as well just to keep routine and sanity. It’s also a good way to listen back to what you’ve done while doing something active at the same time. Just another way to get the creative juices going.

Right now, it would have to be “Something”. This song in particular was written and inspired as a reminder to myself and others to keep ya chin up, motivate, and persevere through these hard times. Mentally, I think it’s important for all of us to watch over each other and to make sure we all get through our tough times with a lot more love and support,  especially now. The world needs more of this, and “Something” is kind of the embodiment of what I want people to listen to and use when you’re having a bad day, week, month, or in this instance, year!

I don’t mean to be biased, because he’s my brother in law, but Toronto Producer and Artist Kierscey has always been a favourite of mine. We’ve worked on so many projects together, and one of the reasons I was given a lot of the opportunities in my musical career.

Other artists I listen to currently are Meagan De Lima, Mark Pelli (from Magic), and August Rigo. All of whom are supremely talented, but also genuine, lovable human beings.