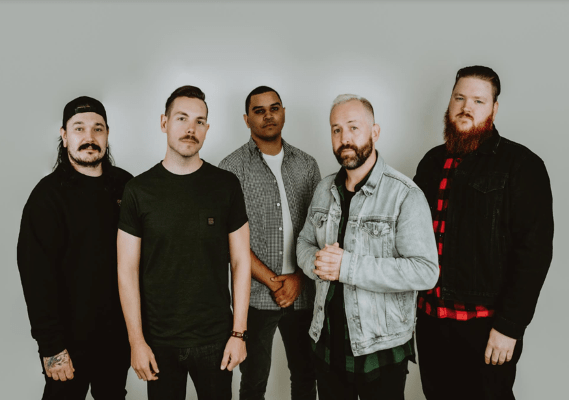 Ottawa pop-punk group We Were Sharks, has released a brand new single, “Bring Me Down” via Known Accomplice. “Bring Me Down” follows the release of the band’s previous single “Shameless.” Both come off a larger body of work due out later this year.

“”Bring Me Down” is about a toxic person who injects themselves into your life, they try to be overly genuine when it’s so clear that they have a hidden agenda. Sometimes, it can be tough facing a person and calling them out for how they’re actually seen. Sometimes that person doesn’t even realize the negative impact they’re having on someone and “Bring Me Down” pulls back the curtain, becomes the call-out, and tells this person that the charade is over.”

Mooney further explains, about the video for Bring Me Down:

“The idea behind the ‘Bring Me Down’ music video was to bring in the new year with some laughs and some lighthearted pokes at the overzealous evangelical ‘healing magic’ powers. We all have problems that are definitely not solved by a simple palm to the forehead or whip of a jacket to absolve you of your woes. We decided to take it a step further and create the music video such that I was the empowered worship leader/healer, magically healing everyone around me (confidently).”

The fun doesn’t stop there as Mooney explains:

“We decided to take it a few steps further for our pre-save and launch a whole gag websitewith all links directed to the pre-save within that models after a cheesy/ridiculous website that some of these magic healers would potentially have created for their own marketing. We literally pulled the ideas from some of these other sites, which in itself is absolutely hilarious (highly expensive monthly membership tiers, questionable testimonials from healed members, insanely high priced merchandise items and intangible items for sale, etc.). In addition to the website, we also created a 1-888 number to really authenticate the experience (voicemail boxes from the band members, “dial 5 to..” etc.). Our mission with this all is to have a unique and engaging pre-save campaign that is both lighthearted and mysterious. Our target is to have our friends, other bands, press and outlets sharing the website and the toll-free number in a comical and ominous way.”

We Were Sharks’ flippancy is a breath of fresh air in the face of a pop-punk scene that’s very self-serious (and seriously lacking self). While many of their peers wax poetic about wearing their hearts on their sleeves, this Ottawa band wears their wit in their moniker; they literally were a band called Sharks until legalities threatened to stop the party.

Based in Ottawa and collecting members from the far reaches of Eastern Canada, We Were Sharks continue to wield the full force of Canadian alternative music. Through a penchant for blending melodic harmony with powerful dissonance, they continue to produce infectious music. Even though these boys already have a lot of mileage under their belts, their book is far from written.

poisonedlava.tumblr.com/
Related ItemsBring Me DownCadence MusicKnown AccompliceontarioOntario MusicOttawa ONWe Were sharks
← Previous Story PREMIERE – Christee Palace releases video for “What Have You Done To Me”
Next Story → Mark February 19 on your calendar. That’s the day that Jess Moskaluke’s new album The Demos will be released