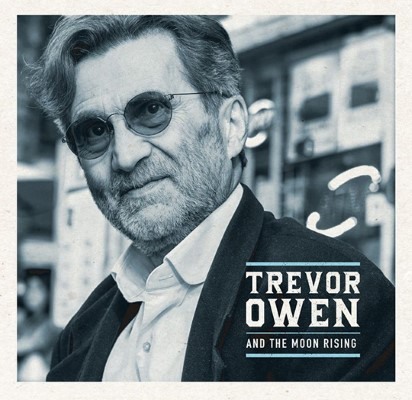 Though the groovy two-minute-spanning number was released as Owen’s latest single, it’s actually a cover of the 1940s tune by the famed American lyricist Hal David. “Horizontal” was the first success David actually enjoyed in his lengthy career, though it was soon banned in Boston for being too risqué… “Where lying down was apparently considered controversial,” according to Owen. The song was co-written by David and Lou Ricca.

Along with “Horizontal,” Owen’s accompanying debut album And the Moon Rising features three other covers and six original tracks. It was released last January and produced by Marcus Vichert. Owen began recording the album in 2018 with engineer Braden Sauder at Marquee Sound in Toronto, and the record was mastered by Stephen Stepanic at João Carvalho Mastering.

Check out “Horizontal” below, and find out more about Trevor via our mini-interview.

I dropped out of school in the 1960s to play rock and roll. Initially, this was in one band and, with the exception of the road trips home in winter, lying on the column speakers packed into the back of the van, my nose bumping too easily into the frozen roof over rough roads, it was a satisfying life. I did not perceive it as a privileged position at the time; we were just making our way, doing what we loved.

Later, music would drop me back into (and, crucially, pay my way through) school, gigging six nights a week throughout southern Ontario, attending classes by day, with some tours to Canada’s Maritime provinces when school was out, backing up lounge singers who had steady work.

When I returned to school, I found that I could still earn a living playing music. This was not always as romantic a prospect as the words may suggest – indeed, there were times when it was surprisingly utilitarian, even in the odd bleak moment – but I had a good ear, as my mother had, and I was grateful to be able to pick up repertoire quickly. Indeed, I still am.

Music formed a continuing interest throughout my resulting career in education, during which I performed in a variety of satisfying musical projects, professionally and recreationally, and quite often with people I met initially as students.

“Let’s make a record,” said Marcus Vichert, my long-time friend and musical accomplice in October 2018, and this album comprises six of my songs, including one co-written with Marcus, and four interpretations I have played over the years, and feel close to.

Tell us about the recording process behind “Horizontal”.

At a tavern, just down the street from the school where I held my first teaching position, I heard “Short Turn,” a solid – and fun – trio perform Horizontal. I learned it on the spot and played it in the years that followed. I have never tired of the song.

Recording it was really fun. When I listen to the recording now, I realize that I forgot all about the finger snaps I used to open the song when I performed it. They were on two and four if you want to imagine it.

One of the things I so appreciate about this record is how the musicians find their way in the tracks. Horizontal was essentially recorded “live from the floor,” as they say.

We recorded the “bed tracks” with the band first, and came back for overdubs and most of the vocals at the end.

The highlight for me was the release of my album, “And the Moon Rising.” I had made the record initially with the prospect of nurturing gigging opportunities in mind. COVID-19 hit just at that time, and, well, that was that.

So, musically, 2020 was all about the album, even though, as we all know now, COVID-19 changed everything for everyone. Clearly, there would be no gigging in support of the record, and so I shifted my focus to nurturing radio play. This remains my focus today.

I would like to return to the studio. Toronto’s Marquee Sound is a great place to make records, and I really loved the time we took to make the album. “And the Moon Rising” took a little more than a year to make, and The time we took – because we had taken the time, really – allowed ideas to develop and evolve, ideas that would not have been possible had we not been able to make decisions while we were together, in the studio.

I have played with many people and in a wide variety of contexts. Among the most creative of these actually involved playing in a cover band, backing up singers in a live open-mic setting. Singers would come up from the audience, literally with lyrics on their smartphones, and consult briefly with the keyboard player, whose gig it was. Then he called out a key and counted us in. One four-hour set, every week for more than a year.

Perhaps not surprisingly, the musicians from those gigs appear on the album.

I have been very lucky to work with those who brought this project from an idea in Marcus’s imagination to the final record: Braden Sauder, engineer/owner at Marquee Sound in Toronto; Donavon LeNabat, keyboards, vocals; Jeff Beauchamp, bass and vocals; Jamie Bird, drums and percussion, vocals; and Marcus Vichert, who served as producer and played guitar.

Cellist/vocalist Keira McArthur came in toward the end of the recording project. I felt her involvement influenced everything she played and sang on and, on “I Get That Feeling,” effectively turned the song into a duet.

I feel very lucky that designer Kerrin Hands made himself available for this project.