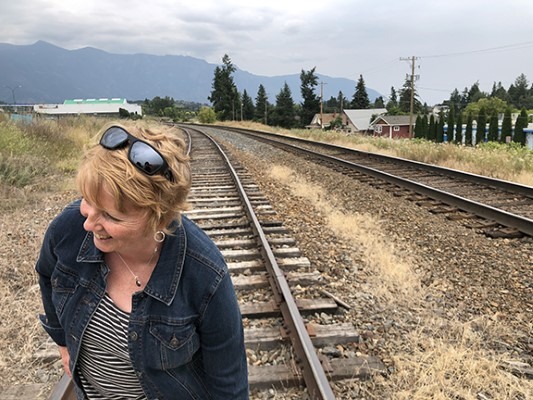 Existential lyrics like “10 years on / So much is gone / Am I more weathered?” and “Age of distraction / What’s the attraction?” make it clear that Kele (pronounced Kelly) wrote this surprisingly upbeat and jazzy tune about the inevitability of coming to terms with aging and the overall struggles of staying adapted with the youth of the latest generation and their trends — the digital age, in this case.

“The Latest Meme” comes from the queer folk singer’s fourth and most recent album, The Song I’ll Write for My Whole Life; the 10-track record marks her official comeback to the music scene, after nearly four years away.

The two-minute, 40 second-spanning track was written solely by Kele and recorded at Zed Productions in Vancouver, by studio engineer Sheldon Zaharko. Along with “The Latest Meme,” the two produced the rest of The Song I’ll Write for My Whole Life together between February and November 2019, before the beginning of the COVID-19 pandemic.

Check out the lyric video for “The Latest Meme” below, and find out more about Kele via our mini-interview segment.

Hi, I’m Kele Fleming and I’m a singer-songwriter from Vancouver. I released my 4th solo album, ‘The Song I’ll Write for My Whole Life’, in late 2020. I wrote the songs on this album over 10 months in 2019 while on vacation in various remote locations in BC and Ontario. I was surrounded by and so inspired by natural beauty and immersed myself in my love of the natural world. The songs capture my love of the natural world and my grief at seeing it threatened.

The soulful environment of my songwriting provided a sharp contrast to the loss of connection we’re all experiencing in these turbulent and rapidly changing times – and my songs reflect these contrasts. Love is contrasted with disconnection; Inspiration with hopelessness. The trajectory of the world accelerating toward destruction, and the love in our hearts that still hope for otherwise.

I am especially proud of this album and feel that it’s my most authentic work to date.

I was born in Trenton, Ontario, and grew up in small military towns in Ontario, Nova Scotia, and on Vancouver Island in BC. I relocated to Vancouver to go to university and founded early 90s Vancouver indie-pop band Hazel Motes – which, along with acts like Lava Hay and the Grapes of Wrath, was said to help define the city’s sound for that era.

Tell us about the recording process behind ” The Latest Meme”.

This song is all about escape – losing oneself in social media and choosing to exit the shit show we’ve created on Earth. It juxtaposes some of the mindless memes circulating social media with a wry pop song that looks back with nostalgia at the New Wave movement.

The Latest Meme is a reaction to the banality of social media and its endless parade of memes and flash-in-the-pan amusements while the world burns around us. In many ways, it’s a timeless tired trope but with the current state of affairs politically and environmentally it seems more pressing and urgent than ever. The song is also self-deprecating in terms of how I engage with social media and how I respond until I finally just get saturated and fed up and shut the darn thing off. There’s satire here and also humor. When we were in the studio it seemed to kick back further than ten years all the way back to the New Wave movement, in fact, it has that kind of feel. The Mini Moog part in the song intro by my long-time collaborator, Ron Yamauchi, really brings that feel to life.

I worked with Sheldon Zaharko from Zed Productions on this album, and couldn’t have picked a better guide! I recorded with Sheldon and my band live off the floor at Vancouver’s Warehouse Studios in Gastown, and it was pure magic! Sheldon really got what I was trying to do with this collection of songs. When it came time to lay down some backing vocal tracks for ‘The Latest Meme,’ Sheldon’s suggestions really brought out the humour of the song and emphasized its meme-ness (is that even a word?!). A great producer and engineer knows how to bring out the best in an artist and a song…That’s Sheldon!

The highlight of the year for me was definitely releasing my 4th solo album, ‘The Song I’ll Write for My Whole Life’. I certainly wasn’t expecting to release the album during a global pandemic and yet this tilted world forced me to think about doing things differently. Despite the lack of live, face-to-face shows I did do a variety of livestreams shows – a benefit concert, a single release performance with Dan Mangan’s Side Door platform, a summer festival, an open stage at a folk club in NYC, and an album release concert broadcast. I had people tune in to these shows from all over the world. So amazing!

And, despite the social isolation, I have built a larger following and musician community than I could have ever imagined pre-pandemic. It’s amazing actually. Social media has been key to making these connections and I feel like I’m able to travel the world through music without even leaving my home!

I do have a lot of plans for the new year…I want to keep doing live shows and connecting with musicians and fans worldwide. My album has just recently started charting on college radio and I’d like to see that grow over the next few months. I’m launching a podcast called ‘Mavens and Mavericks’ on Jan 31st, and can’t wait to connect with the amazing artists I have lined up.

I’m doing more Livestream shows, including a weekly series on Instagram Live called ‘Musical Mondays’ where I perform one of my songs and go deep into the details of my songwriting process.

And, there’s more…I’m lining up plans to release a remix of one of the songs off my album, I have some new songs almost recording to record, I have a few music videos set to release over the next while, I’m working on a Christmas song for release in December, and I’m co-writing a sci-fi musical with my long-time collaborator Ron Yamauchi. I think this will all keep me fully occupied. 🙂

I had the opportunity to share the stage with one of my fave artists of all time, Jane Siberry, a couple of years ago. I’ve followed Jane’s work since I was in my late teens and have been really influenced by her artistry and vision over the years. So, you can imagine, it was a dream come true to perform with her!

Patti Smith is another artist who has had a huge influence on me as an artist. Her fusion of rock and poetry has been a huge inspiration for me since I first heard her ‘Easter’ album many years ago. I have always written poetry and her work inspired me to follow my voice and bring my poetry into my music. On my new album, you can hear Patti Smith’s influence in the spoken word part on ‘The Last Apple. It would be an absolute dream to collaborate with her.