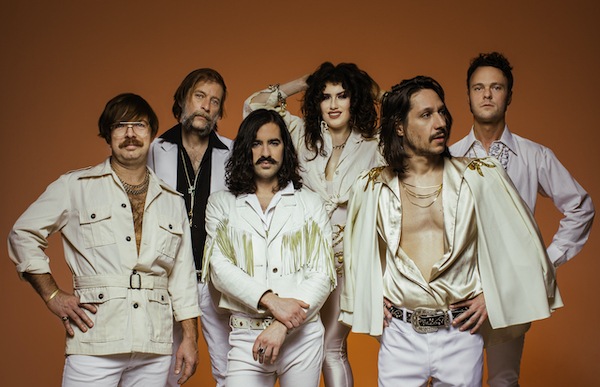 Last week, Barry Paquin Roberge announced their new album Exordium To Extasy, out on Costume Records on February 26th. The neo-disco sextet from Montreal a​lso shared their new single and video “BPR Strut (Join Us & You’ll Be Fine)”, an impossibly heady and funky track offering a glimpse into the satin-clad and fringe-laced world of BPR, a toe-tapping and head-bopping anthem to usher you through these cold winter days.

On the video, Etienne Barry explains:

“We invite the populace to strengthen their core and test their mental fortitude. Directed by longtime collaborator Ariel Poupart, who also plays the role of a mastermind known only as “The Vision”, the video shows us in skin-tight spandex, filming a straight-to-VHS home-workout tape destined to fortify the masses… and control them!”

Barry Paquin Roberge, also known as BPR, are back and hitting a home run through the ages with their upcoming album, Exordium to Extasy. As disco was dying around the globe in the late 70’s, it was still very much alive and booming in Montreal. For years, this unstoppable scene came to dominate many of Quebec’s radio stations, but eventually succumbed to the steel-toed platform boots of hair bands. Now, this glam squad is here to rekindle the disco flame and make the people of today dance their worries away.

Songs such as “BPR Strut” and “Hot Stuff” will turn any boring commute to work into a Soul Train-esque catwalk. BPR are also bringing back a sense of community and the art of arrangements to pop songs. The blend of male and female voices reaches out to all who want to have a good time. Groovy guitar licks, party-pleaser synthesizers and fluttering flute are exactly what people did not know they needed in their lives.