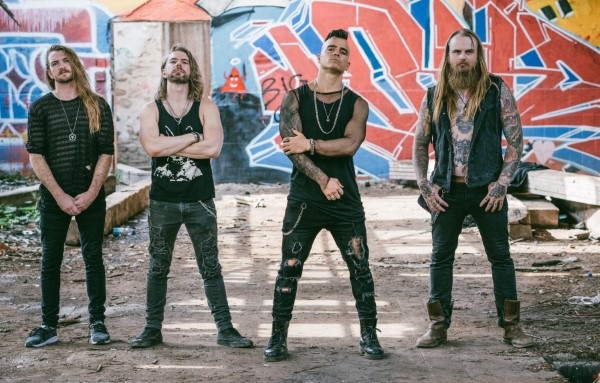 Toronto, ON-based artist, Daemon Gray has unveiled his debut full-length album, Follow Your Nightmares via Out of Line Music.

The band has carved out a distinct corner of the metal genre with hard-hitting songs that appeal to the most discerning fans as well as the metalhead that lives inside us all. F*ck following your dreams. Daemon’s mantra, “Follow Your Nightmares,” reminds us that true strength is attained not by chasing the light, but rather, by facing and transcending fear itself.

Check out the album below, and find out more about Daemon Gray via our Five Questions With segment.

Hey, what’s up everybody it’s Daemon Grey here. Greetings from the eternal \m/ As a quick introduction I’m just a diehard music fan that’s lucky enough to have the opportunity to make music as well. Heavy music raised me and I am forever grateful. I’m all about killing internal fear and living a kind, honest life as best as possible. I’m big into health and wellness, horror, cold exposure, and pretty much anything that’s extreme and fun without messing up the mind or body \m/. Currently writing a book about how to increase inner strength in order to defeat personal insecurities. I think most people take life too seriously. Just trying to learn and have fun on this wild ride that we call life until our spirits pass over to the infinite (=

Well, ultimately I believe powerful music is music that comes directly from the soul. Soul music can be across any genre and any flavour. My primary focus is just to make sure that everything I create comes from an authentic place within myself rather than making music for someone else to like. I would say my writing style is fairly unique given I write all of my own music but I do not play a single instrument or know how to read or write music. I build song concepts in my brain I let the emotion and the energy of the song simmer in my head usually from 2 to 6 months. I like to write refs while I’m on a bike ride or a run and I like to hum melodies throughout the day or in the shower. Over time, the song concepts that I have in my head mature and are ready for me to start laying them down in garage band. I record all of the instruments with my voice on GarageBand and lay the framework of the song. From there I put down vocals and again let everything sink in. After another couple of they usually re-record the entire thing as a rough draft of the song that’s now ready to go to a professional studio (= I’ve never heard of anyone that makes music like this, however, I heard Michael Jackson write songs with his mouth too :p

Oh absolutely! I believe creativity and expressing our creative spirit is one of the most fundamental reasons we are alive so I am always creating. I’ve taken some of the anger I feel about the corruption happening in the world today and turned that into music. I’m actually making fantastic progress on a second record and I’m really excited about that. I’m not sure how exactly I’ll get to LA tactfully make the record come to life but if I have to teleport I will (= the second record is going to be a lovely mix of all things Daemon Grey just like the first record. I’m also writing a book about how to cultivate inner strength and defeat personal insecurities so that keeps me creative.

I would have to say “Stoned and Alone” just because I think that song holds a special amount of magic.

I would have to say my favourite Canadian artist is probably Despised Icon from Montreal. They are a French deathcore band that in my opinion has kept it brutal and real since day one. I’m a big fan!