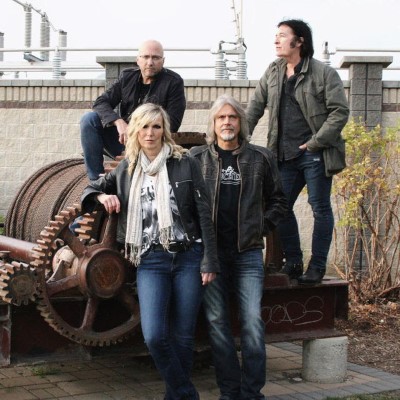 Canadian band, Tucker Lane has teamed up with us, at Canadian Beats, to unveil their brand new video for “Ghost”. The single is from the band’s sophomore album, Random Fireworks on a Beach Obscured by Trees.

The video was shot in Saskatchewan and directed by lead singer Leslie Stanwyck and bassist Johnny Sinclair. Ken Sick from Ksick Productions worked as the videographer and the editor. The clip portrays well the times we live in now; each member presents themselves alone in a room, thinking about the past and lost in their memories.

“The feel of this video is somewhat melancholy and is more about losing connections and having people that you use to see on a regular basis, only alive in your mind,’’ said lead singer Leslie Stanwyck. “It was fun for us to do a video that wasn’t straight performance but had a bit of a storyline. We were able to work in black in white for the first time with Tucker Lane.’’

She continues. “The inspiration behind the video is the loneliness of these times we are living in.  It shows each of band member in their sparsely decorated rooms symbolizing the limitations placed on us by the current health crises.  Tucker Lane chose to do the video in black and white to amplify the starkness and loneliness that is currently many people’s reality.  All the band members are holding a different object representing a memory.  The door in the video represents the hope that we all have that one day, we will be able to live our lives normally again.”

“There’s a duality in this video about what is a “real” ghost and being a living ghost in the form of being just a memory,’’ said bassist Johnny Sinclair. “It’s been way too long since we’ve seen so many people that it seems like they are only alive in our memories, much like a ghost.  We don’t see anyone, and no one sees us, but yet, here we are and here you are, ever present in each other’s hearts and minds.  Alive but gone.”

Check out the video for “Ghost” below, and stay up to date with the band via their socials.