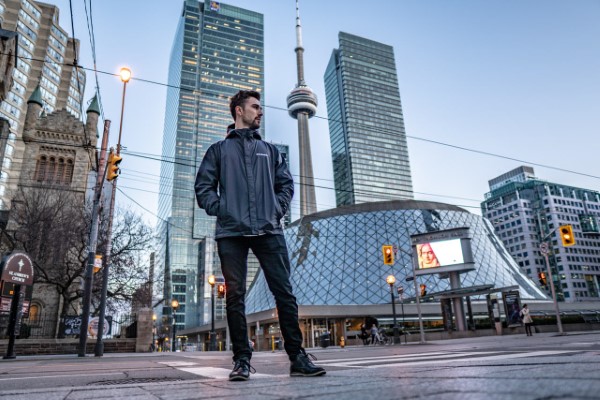 The 5-track EP is a collection of songs stemming from the desire to connect with his audience. Each song is crafted from an intimate and special perspective anchored in the singular experience of being human. His sound is comparable to John Mayer, D’Angelo, and Pink Floyd superimposed over a unique strain of introspective songwriting.

Growing up in Pickering in a musical household, the emerging songwriter picked up the guitar at age six and began writing songs in his early teens. He weaves pop, r&b, rock, and folk in all his compositions, allowing the listener to define his genre for themselves. Through mellow guitar, rich vocals, and hook-filled songwriting, his music is the perfect listen for an after-party with friends or a late-night listening session with earphones.

We spoke to Tropiano about his new music and here’s what he had to say.

What was the initial concept for this EP? Did you stay true to that inspiration or did it change?

I felt it was important to make my first collection of songs essentially a mixtape of different genres that I love to play. As you listen to “Handshake”, each song sounds different from the last, but they still work together to create a cohesive listening experience. The difference in sound between “Shadows” and “Try out for Heaven” is pretty drastic, but the difference between “Cape Town” and “All the Way” is much more subtle. Experimenting with just how different a song could be from the last one without being too different was a rewarding balancing act for me. I draw inspiration from a lot of different artists and genres, so it was important that I express as much of myself musically as possible. I don’t think I covered everything I like to write and play on ‘’Handshake’’, but that’s also exciting because it leaves so much room to explore my sound.

When did your writing process start? Can you take us through what that looked like?

It was pretty fragmented, to be honest. Technically, the writing for ‘’Handshake’’ started when I was in grade 11 or 12 and finished maybe a month before recording each song. I would have a riff that I loved to play – for example, I wrote all of the acoustic guitar parts except the bridge for “Used Information” in high school. Then, I spent four years doing my undergrad, which didn’t leave a lot of free time for making music. I always wanted to pursue music, but it wasn’t until after university that I decided to do it for real, and that’s when I had the time to finish songs and write new ones. “Try out for Heaven” is the only song that I wrote from scratch. It was one of those gifts that songwriters get every now and then where the song comes together in an hour and you have no idea where it came from. Everything else was revisited and refined again and again, and it was really great to finish these songs that were just ideas for so long.

What’s the inspiration for the EP name “Handshake”?

“Handshake” is meant to be an introduction. It’s me introducing myself as a musician to the world, and in turn, hoping the world greets me back. A handshake also reminds me a lot of the business world. In a sense, the EP is the tangible result of me putting a stake in the ground, dividing the time before and after my relationship with music became professional and not just personal. “Handshake” took on an unexpected new meaning during the pandemic. I think even the world itself feels nostalgic of a time where something simple like a touch or a hug was taken for granted. The word also just looked good written on an album cover.

What was it like producing your first record? Did you learn anything about your identity as a person and as a musician?

I’m an extremely patient person. I don’t mean that in a braggy way – in fact sometimes it can be a huge issue – but in many ways, it helped me see this project through to the end. I found the experience of recording my own music in a proper studio for the first time exciting rather than daunting. There was a lot to learn, but I was surrounded by intelligent, talented, and supportive people that helped me all the way (no pun intended). It made me appreciate my friends, families, and colleagues even more, and now I totally understand the acknowledgments sections in books and liner notes in albums. The people that supported me are just as responsible for creating this EP as I am.

What’s your favourite track off the EP? Why?

I think it’s “Cape Town”. It was the first song I recorded for the EP, and it’s the most melodic. For me, it’s also brutally vulnerable. Although some lines in it are a bit cryptic, every time I sing them, I know exactly what I mean, and it feels deeply personal every time. It’s a song about a break-up as much as it’s about depression, with Cape Town being a sort of mental safehouse for when you’re at your lowest. I’ve never been to South Africa, but I’ve been to Cape Town in my mind plenty of times, and of all the songs on the EP, it’s the most emotional for me to sing.

You reference a Bruno Mars lyric “Locked out of heaven” in your song “Try Out for Heaven’’. What’s the story behind that reference?

That line happens during the final chorus. “Try out for Heaven” is essentially four minutes of a guy feeling sorry for himself for cheating on his partner. He has a new way of approaching self-loathing in each verse, like asking himself what else he could lose, feeling like he’ll never find love again, etc. I jump up the octave when I sing the last chorus of the song, and I wanted the lines to be extra hooky. Bruno is such a force that you pay attention when you hear his name. The character in the song saying “I should have listened to more Bruno Mars / Turns out I’d be locked out of heaven” is the closest he comes to accepting responsibility for his actions. There’s also the obvious similarity in the titles “Try out for Heaven” and “Locked out of Heaven”, and I even threw in the guitar riff from Bruno’s song right after I sing that line, which you can hear if you listen closely.

“Try Out for Heaven’’ is the only song that isn’t based on personal experience. What pushed you to write from an exterior perspective?

Some songs start as an idea, or a title, or an instrumental piece that you put lyrics to later. ‘’Try out for Heaven’’ wasn’t any of those. I was lying in bed after a long day just playing random stuff on guitar, and then I played the intro riff and thought it was a cool progression. I just started singing, and it turned out to be a song about someone made up. I tried not to think about it too hard while I was writing it. When I listened back, I liked that it wasn’t about me because all of the other songs on the EP are. I was also happy with it because songs by some of my favourite writers like Bruce Springsteen and Tom Waits are almost always character-driven, and it felt great to explore that side of my writing.

Your sound has been compared to household names like John Mayer, D’Angelo, and Pink Floyd. Did such artists inspire your sound growing up? If not, who did and how?

I grew up in a musical household, which made it easy to be exposed to lots of music from a very young age. My Dad is also a guitarist and songwriter and made a point of taking me to concerts. I saw my first concert when I was 9 years old. It was at the then Molson Amphitheatre (now Budweiser Stage). I was always influenced by a Latin sound which I can also attribute to my Dad’s South American roots and the music he makes. I’ve seen John Mayer play Toronto almost every time he’s come. The first time I saw him was on the Battle Studies tour (also at the Molson Amphitheatre), him and the band were so great. I just remember walking out of the venue that night thinking to myself “this is what I need to do with my life”. A few years ago, I drove down to New York City for the Roots Picnic and the headliners were The Roots, John Mayer, and D’Angelo, with everyone playing on D’Angelo’s set. I was in heaven. If their records didn’t already inspire me, their chemistry that night made me sure that I needed to pursue music.

What does this EP mean to you as an emerging artist?

For me, this EP represents action. It’s so easy to talk about what you’ll do “one of these days”, and that type of thinking is especially dangerous when you’re doing something creative like making music. It’s one of many solid excuses that can be used to avoid actually making music. I definitely struggled with that mindset for a while, especially when I first decided to get serious about a music career. But at a certain point, I realized that if I want great songs, I have to write songs. If I want to finish an idea, I have to finish the idea. It sounds painfully simple when I say that, but the mind can make the craziest things sound believable. When I had that realization, it enabled me to make the EP. When I look at the EP on Spotify, I feel so proud of myself for fighting the anxiety that comes with releasing original music. It’s out there now, and the great thing about making music is that no one can take it away from you.

I released “Handshake” in November, and I’ve been writing as much as possible since. I don’t want to lose my momentum, and I can’t wait to share what I’ve been writing. I’ve been collaborating a lot more, whereas the songs on “Handshake” were written alone, and there’s something really exciting about bouncing ideas off another writer. I haven’t completely decided on the sound for the next release, but I’m leaning more toward a pop, dance, and rock sound.