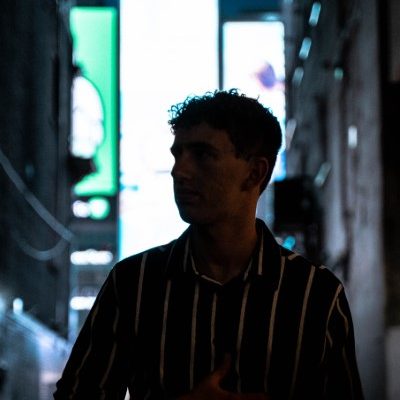 Toronto, ON-based singer-songwriter Peter Drucker has unveiled his brand new single, “Jim and Pam”. The single is named after The Office‘s dynamic duo – a show that Drucker may become ostracized from society for admitting he’s never watched an episode of.

“Musically, I’d been bouncing the verse around in my head for weeks. Capo 4, it’s the sort of hammer-on C-Em-F thing that I genuinely could not figure out how to write a melody for. I knew it was a solid lick, but I kept trying to have a top-line that runs counter to the groove (Ed Sheeran’s “Shape of you”, but worse), but it wasn’t working; it was too cluttered. So I stripped it back, sang the riff melody, did a sort of weird Mad-libs style word association and BANG, half of a song. The chorus just kind of fell out of me while I was sitting there. It follows this idea of cliches, and the need to embrace them. My friends are often scared of being cliches, and that always confuses me. Why does feeling the same way as millions of people immediately make you feel tired, and re-used?

The song is called Jim and Pam, named after the famous dynamic duo from the American hit TV show “the Office”. I may become ostracized from society for admitting it, but I’ve genuinely never seen a single episode of this show. Please hold your stones, let me explain. I originally wrote the song with the lyric being “we can drive round these streets like we’re Bonnie and Clyde”, and besides the fact that that has one syllable too many, the line “Bonnie and Clyde” has been used in roughly 6 million songs to date. Since “Jim and Pam” in many ways are the modern day version of “Bonnie and Clyde”, a simple swap and we have a Billboard #1 heatseeker on our hands.”

Check out the single below, and stay up to date with Peter via his socials.
Peter Drucker · Jim And Pam