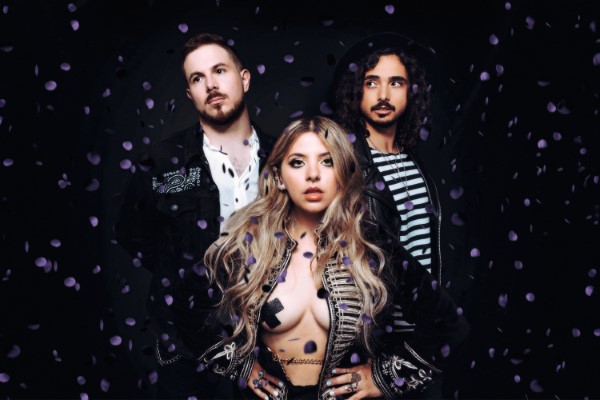 Pop-infused indie rock band MONOWHALES announces the release of a new album titled Daytona Bleach slated for March 5, 2021. Produced by JUNO Award-nominated Producer Ryan Worsley (Dear Rouge, Brave Shores). In anticipation, they usher in the new year with a fitting single “Out With The Old” now streaming and available for purchase.

Drummer Jordan Circosta conveys that “‘Out With The Old’ is an anthem for the disenfranchised. It’s about the loss of innocence and entitlement we’ve all experienced over the past year. In the midst of a paradigm shift, we have no choice but to embrace the new reality of our lives and take a vicious grip on hope in spite of it all.”

Vocalist Sally Shaar adds, “As a band, we try our best to always move forward with positivity despite the darkness. We are working towards more caring, nurturing, and inclusive ways of thinking and treating one another.”

“All or Nothing” mixed by JUNO Award-winning Mix Engineer Jason Dufour (July Talk, Tokyo Police Club) became the #1 most spun song at INDIE88 Toronto and has climbed the Top 10 charts at both Mediabase Canada Alternative Rock and Billboard Canada Modern Rock. It’s the follow-up to the band’s hit single “RWLYD” which broke the radio record for the highest-charting unsigned band by hitting #2 on the Mediabase Canada Alternative Rock Chart in early 2020.

Based in Toronto, MONOWHALES exploded onto the scene in 2017 with their debut single “Take It Back”. Quickly rising to #25 on the Alternative Rock charts in Canada, the song was part of a collaboration with producer Al-P (Death From Above 1979, Young Empires) that spawned their debut EP Control Freak. The band followed this up with countless shows across Canada, including support slots for K.Flay, Sloan, and Marianas Trench, amongst others. In 2019, MONOWHALES were awarded the Jim Beam INDIE Award for Best Alternative Artist/Group of the Year and saw multiple songs from Control Freak featured in Netflix’s Spinning Out series and CBC drama Northern Rescue. Last year, MONOWHALES performed back-to-back worldwide live stream shows from the legendary El Mocambo in Toronto.