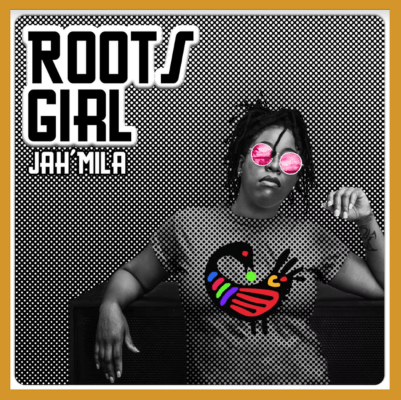 “Roots Girl” is a celebration of Jah’Mila’s deep Jamaican culture and the strong matriarchal energies that it comprises. Musically, the track pays homage to Israel Vibration’s “Rude Boy Shufflin” while re-interpreting the song’s central character and iconic theme. The song shifts focus from a male-centric imagery of the inner city mainstay with a worldly ego on his shoulder to that of a “Roots Girl” instead, presenting a narrative of the archetypal “artical” woman who tunes in to the intimate knowledge of herself, connects with her cultural roots and takes pride in being her authentic self. In this new self-reflective context, the song also comes to terms with how Jamaican culture is presented through popular culture and takes the opportunity to show a different, more relaxed side.

“I always thought that my love of music would relegate me to background singing because the reggae industry is so very male-dominated. I don’t see myself in the image of the popular artists that are coming out of Jamaica right now. When you look at the mainstream acts, you start thinking about where your place is in all of it,” says Jah’Mila. “With ‘Roots Girl’ I have stopped thinking about all that noise, and instead invited people into my world. It’s an honest portrayal of who I am and where I’m from, a song about finding my voice and my place in music.”

The video showcases a few of the singer’s typical hang-out spots on the island, and the music traces connections between her Jamaican reggae roots and her new Maritime reality. The video begins in the historical location of Discovery Bay and follows Jah’Mila from her favorite childhood beach and local communities, to the Dub Club in Kingston – a longstanding cultural hub. The video also features popular Jamaican dancer Kymmone “Nanny” Ennis, a fitting example of a ‘roots girl’ who portrays strong feminine energy through movement, and who is named after one of the oldest national heroes in Jamaica: Nanny of the Maroons. The Maroons were freedom fighters in the country throughout the 18th century, many of whom were exiled to Halifax, Nova Scotia by the British government in 1795.

“It makes me proud to be able to sing ‘roots girl’ over this iconic reggae rhythm as a celebration of my Jamaican roots, and also in honour of my journey as a woman in reggae music,” she says. “I hope it will inspire a little girl who wants to know what it means to be uniquely musical and creative, and remind them that it’s okay to be themselves.”

Check out the video for “Roots Girl” below, and stay up to date with Jah’Mila via her socials.