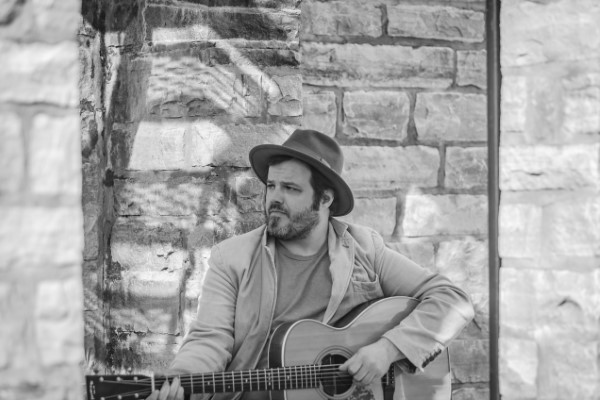 Montreal, QC-based blues/folk musician, Adam Karch released his fifth album, Everything Can Change in February 2020, just a few weeks before the COVID-19 Pandemic hit. The album features eleven tracks mixing various genres to create a unique sound that will leave you wanting more. The instrumental, “Porch Groove – Saturday Evening”, although instrumental, was probably my favourite on the release. Check it out HERE.

Check out the rest of the album below, and find out more about Adam via our Five Questions With segment.

My name is Adam Karch. I’m a singer/songwriter from Montreal. I started playing guitar at the age of 12. I learned from my older brothers who had a rock and roll band that amazed me every time I heard them rehearse. I’m a left-handed player also and I’ve been performing in clubs since I was 14 ( accompanied of course). I have 5 records to my name to date and I plan on touring once this pandemic lets go of its grip.

My music is a mix of Americana folk/blues with a lot of fingerpicking involved. I’ve been a musician for over 25 years and the most fun I have is rearranging other hit songs to my style and approach. My last attempt was ” Night Moves’ by Bob Seger. It’s on my 4th release called ” Moving Forward”.  I try different tunings to adapt to the song that can bring out a different feel and approach to the song. It becomes my own in a sense, almost like that’s the way I would have written it if I had written it. I perform mostly as a solo artist, it’s much easier to travel and I feel more at home with just vocals and guitar. I can take the songs where I want to without having to come back necessarily to a specific verse or chorus. I’m also one of those people who will think of a melody in my head for months, then I’ll add lyrics eventually and it will all come out in a matter of an hour or two but it was incubating in my head for a long time. I don’t cough up songs fast, it’s a slow process and sometimes to the point where I’ll go in the studio and write lyrics or a melody right before the take ( recording) It has to stay fresh for me. I can’t play a new song I wrote over and over before I record it. That can happen after the record is out. I need to capture the magic and tension of a new song without it being too over thought before it goes on a record,

My latest record came out a few weeks before the Pandemic hit and the timing was terrible. I was ready and had a decent tour booked in Quebec and Ontario to promote it. Since the pandemic hit. I have kept up my practicing although it has been hard sometimes to just practice and almost have no live shows for months. I did do a few live streams which was fun to play again but the human feel and interaction wasn’t there so I had to get used to that. I tried writing new material but I wasn’t inspired at all since the pandemic. I believe it took me months to settle into this new reality and once I came to accept it just not too long ago, I have a new attitude towards this pandemic and I have renewed my thoughts so I am in the process of writing a new solo record for maybe 2022. I still have this brand new record to tour and show the people who are interested and I am hopeful to get back on the road and play all these new songs. I know all this will pass and in the meantime, I am accepting it and staying in shape mentally and physically as best I can.

I would have to choose The Porch Song ( Saturday evening). It’s instrumental but it really speaks to me as far as how I was feeling when it all of a sudden came out one day after a long thought process and messing around with different tunings. It’s a fun happy instrumental that I like to call my go-to song.

At the moment I haven’t been up to date with any new music. I like all music but sometimes new music influences me too much.. It sounds weird but it does and what I mean by that is I try to keep it rootsy and organic and I’m easily influenced so I need to stay with my old-time folk and blues artists and from there I can sneak out and see what’s new out there. Maybe I should be more on the lookout for new artists and music in the future.!