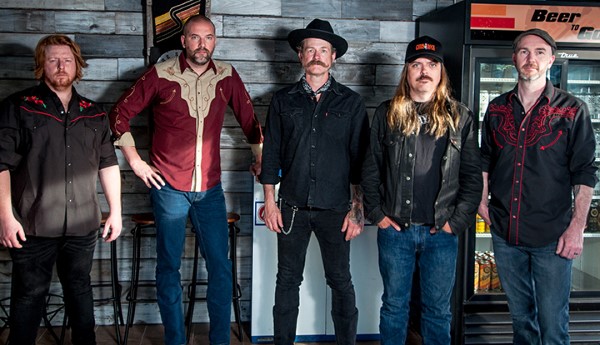 With nearly two decades — not to mention coast-to-coast touring, over 120,000+ streams across platforms, and five studio albums — under their belt, Drop of Blood offers a glimpse into one of Canada’s most bona fide country acts.

“The Divorcees have been a story of never, ever taking the easy way out,” says Madsen, “and on this record, we most definitely did not. It’s called Drop of Blood for a reason.”

“This album truly represents where we are as a band — one that never settles for less, one that values authenticity and one that will push as hard as it can to achieve its vision,” Macintyre continues, citing their 2005 start and the tenacious arc between. “Drop of Blood is a near-perfect take at what 16 years of standing strong, despite impossible odds, looks like. We’ve been there, done that. We’ve paid our dues. This album tells that story.”

As can be expected with any legacy-in-the-making act, this release goes beyond marking The Divorcees’ status as ever-evolving artists; it also underscores the band’s long-held standing as friends and brothers.

A testament to this friendship is the return of founding member and lead singer, Jason Haywood. Haywood, who decided to take his leave in 2008 to pursue his own creative endeavours, rejoined the group in late 2019 in an effort to rekindle the collaborative spark that shaped their debut album.

As Turtle explains, “we brought Jason back after many years, largely because we wanted to revisit making music together. As separate artists, we’d each grown considerably over the past decade and we had a feeling that we could come up with something special if we joined forces. In addition to the 11-track LP, The Divorcees are releasing a documentary of the same name to complement the offering.

“We knew making it this far as a band warranted some extra attention,” Thomas shares. “We decided it was time to document the making of a Divorcees album and were very fortunate to have Kevin’s daughter Harmonie, who is in media studies, come in and film”.

“We’re really happy to finally be able to share an intimate part of our world this way. This documentary gives a bit more of an in-depth look at our creative process, our history and a glimpse into what makes us who we are as people.” Haywood adds.

Check out “Dying Breed” below, and find out more about the band via our mini-interview.

I’m Alex Madsen, co-lead singer and tele picker/b-bender guitarist in The Divorcees. We are a five-piece country band from Moncton New Brunswick and have been around a little over 15 years. We’ve been told our style isn’t what you normally hear in the Canadian Country scene. It’s safe to say we’re not the radio-country you hear on the FM stations nor are we the Cowboy or Indie style stuff you usually hear in the rest of the country. We’re more along the lines of old-school, trucker country – Waylon, Merle, Buck, that kind of thing. We’re real big on the outlaw sound and love those great writers like Billy Joe Shaver, Johnny Bush, and the like. It’s definitely our roots shining through. That kind of country – jukebox country – is still pretty big around here.

Tell us about the writing process behind ” Dying Breed”.

For me, the writing process, for that track was pretty reflective of my life (I’m 48) but I also wanted to be about the band too. It was definitely one that everyone could relate to in that we’re all a bit older and have earned more than a few battle scars. Both myself and the band have wondered that chorus out loud a few times! But sometimes, I wonder if that song almost feels more like a question than a statement – are the Divorcees the last of a dying breed? Are there any more of us out there? Can others relate to our take on life and the types of dues we’ve paid? With lyrics that were so personal, the music came quickly, actually, in that the song almost played itself. We wanted a real gritty groove and are glad the song has a good swing to it. Me and Shawn (guitarist) got to stretch out musically and you can hear it in our double-lead work. It’s something we’re proud of and have wanted to do for some time. When Jason Haywood came back into the fold and back on acoustic, it gave us a chance to work out more intricate parts on electric guitar. This song’s a good example of that and you’ll hear more than a few double leads on the record, This one is a favorite for Shawn and I.

Easily the highlight was bringing this album to completion. It was a big challenge due to time constraints and, of course, a global pandemic! Every step we took involved tremendous effort. Lots of long hours, revisions, alternate mixes and masters, you name it. Duane Kelly (a soundman with Matt Andersen) and Turtle (Divorcees bassist Denis Arsenault) made a great production team for this record and left no stone unturned, from vocals to steel guitar and everything in between. Truly above and beyond. And our drummer Kevin MacIntyre stepped up by getting behind the board and helping them engineer the record. It really was all hands on deck! We rented a beautiful cottage off the water in Rexton which you can see in our video and just went right at it. It truly was a drop of blood to make this record but we’re not the kind of band to lay down easy…pandemic or no pandemic! On another note, for me personally, it was great to have Jason Haywood come back to the fold. Haywood and I have been close friends for years so it’s great to have him return and I know the rest of the guys feel the same way.

Our goal for this year is to take this album we fought so hard for and introduce it to a larger audience. We’ve always been the kind of guys to keep our heads down and just do what we do. We’re low-key like most New Brunswickers are. But this time, after 15 years of toughing it out, we wanted to get out there a little further. We hope “Drop of Blood” does that for us. We’re really proud of this record, especially with Jason Haywood coming back after 12 years. We think it’s the best work we’ve done and we want the world to know!

There are many artists who would be a pleasure to collaborate with! I’m a big, big fan of Shooter Jennings (Waylon’s son) as I find him to be a real renaissance man. The guy’s the whole package – great writer, singer, and as of late an extremely talented producer. He just did Marilyn Manson’s record which is getting some great reviews. He even did some stuff with Georgio Moroder! He’s open-minded, which to me is the spirit of outlaw country. I think my band and Shooter would get along great. I also think the band would be pretty thrilled to collaborate with guys like Sturgill Simpson. The Divorcees love what he does and the chances he’s taken over the years. He’s fearless and not afraid to stick to his guns. We can relate to him in a major way.