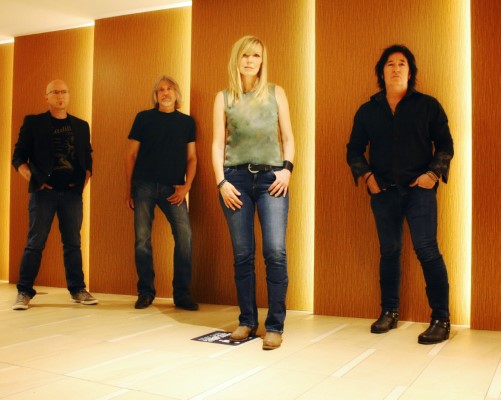 Tucker Lane’s sophomore album wasn’t made under normal circumstances, but that’s what makes it so unique.

Titled Random Fireworks on a Beach Obscured by Trees, the 13-track release came together through months of backyard campfire shows and basement recording sessions in their home of Saskatoon. Vocalist Leslie Stanwyck and bassist Johnny Sinclair — simultaneously composers and producers — are veterans in the Canadian music industry. They earned critical and commercial acclaim during their days with the Juno-nominated, platinum-selling band The Pursuit of Happiness. Through their extensive career, they traveled across the country and earned a place as fixtures in the industry.

As Tucker Lane, Stanwyck and Sinclair are starting a new chapter of their careers, and we were excited to catch up with the duo to hear all about their new record.

Achieving longevity in the music industry isn’t an easy feat, but you’ve managed to sustain this impressive career spanning multiple genres — what key lessons have you learned being in this industry that helped shape where you’re at with your careers today?

Don’t quit and try your best to not listen to the naysayers.  At the end of the day, you do it because you love it, because you can’t not do it.  Things don’t always work out the way you hoped and there will more than likely be some dark days, but you just have to stick to your guns and believe in yourself even when no one else does.  We’re at a point in our career where we’ve been through so many things and when we look back, it’s our love of creating and making music that sustains us, with no expectations.

Why was Tucker Lane the right choice for the next step in your careers? What was it about this partnership that was so exciting to explore?

When we first located to Saskatoon from Toronto, and the opportunity came up to start a band with a friend I’ve known since grade 6, it seemed like the logical step.  We started playing around the Saskatoon area and kept getting requests for Country music.  We learned some Lucinda Williams and Steve Earle and felt totally comfortable playing these and thought why don’t we just write songs that could be presented this way.  Brent’s guitar style is a big part of the Americana/Country Rock sound we have and adding elements like mandolin and pedal steel is a lot of fun.

What was the writing and recording experience like in this pandemic-era of making music? Did you find yourselves having to pivot from the way you were used to recording?

Nothing really changed in the way we recorded.  When the pandemic first hit, we made a couple of lockdown videos where everyone recorded their part at home and sent it to Leslie and I where we compiled it into a finished track.  That was different for us.  When the lockdown restrictions were lifted the band included each other in their personal bubbles and we got together and started jamming and writing and then recorded.  We then recorded the same way we always have.  We generally like to have another set of ears in the mixing process and this time we were fortunate to have Bart McKay do it right here in Saskatoon.

It’s been said that this album takes on certain qualities that were inspired by the Rolling Stones’ album “Some Girls” — can you expand on what stylistically drew you to that particular album?

Well, the Rolling Stones have long been one of our favorite bands, and “Some Girls” one of our favorite Stones’ albums.  When you listen to that album you hear rock, disco, r&b, country, and new wave/punk all on one record, yet they still definitely sound like the Rolling Stones.  As a band, we definitely feel confident performing these different styles without losing the band’s identity within the song.

Each song on the album has its own personality. I can imagine the experience of recording them had its own uniqueness — were there any favorites that you really enjoyed putting together?

Some of the songs on this record have a more lived-in feel because the band had been performing them live for a couple of years and several of them were written and recorded kind of last minute, like “Ghost”.  When we first started working on “Ghost”, we were all really excited about the vibe that was being created and it just seemed to flow out of all of us quite easily like it already existed.

What do you hope the legacy of Tucker Lane will be?

I hope that when people think of Tucker Lane they’re like, “Ya, they make great music!”