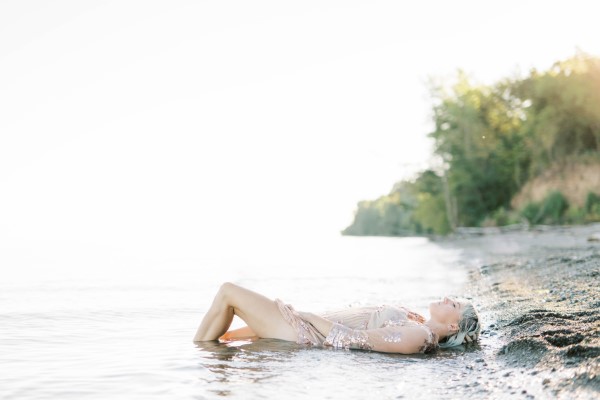 St. Catharines, ON-based pop singer, Kathryn Sinopoli managed to leave some of the demons of 2020 in her past and has released possibly her most powerful and inspiring single to date, “Waterproof”.

Along with producer Derek Elliotson, Sinopoli penned “Waterproof” last August after experiencing what she said was a “long conversation with a counsellor.” The reflective, piano-driven ballad is about a personal relationship which didn’t work out, according to the singer/songwriter.

“Not sure where to place blame; knowing two parties are always guilty,” she adds in regards to the wilted relationship.

Not only do the heart-filled emotional instrumentals of “Waterproof” instill hope for the prosperity of a long-decaying romance in the listener, but Sinopoli’s raw, tear-jerking lyrics take it to the next level. It’s clear that the up-and-coming artist has no trouble connecting her passion — music — with her deepest, most personal feelings after hearing the emotional chorus. She sings: “(When) I was sinking in a sea of inadequacy / I was gasping hoping you would rescue me / I could see you on the shore / Wondering what you were waiting for / I’m sorry I thought you were waterproof.”

Check out “Waterproof” below, and find out more about Kathryn via our mini-interview.

I am a Canadian songwriter and recording artist, who currently lives in St. Catharines, Ontario. My last name Sinopoli, rhymes with monopoly. I released two songs in December, one is a mainstream pop song, which made the Canadian Billboard AC chart, and the other is a pop ballad called Waterproof. I haven’t always been this busy with music though. I went to University to become a French teacher and used to just dabble in songwriting as a hobby.

Tell us about the writing process behind ” Waterproof”.

Waterproof is definitely the most personal song I have released to date. It’s the song I didn’t know I needed to write until I did. I was digesting a therapy session I had had the day before, that’s something I think is really important to do, let all those thoughts and feelings tell you a bit more in the days after a therapy session. I was in my kitchen when the idea for the chorus first came to me because when I asked myself what I had needed in my past relationship, it was to feel like I hadn’t been forgotten. I was searching for the answer to the question “How could you not know I needed you?”. I read an interview with Adele once where she said “If a song doesn’t make me cry when I’m recording it, then it’s not a good song”. Well, in the first session in the studio to demo “Waterproof” I didn’t even make it through the first take. That’s how I knew I had tapped into something important.

Without a doubt, it was the unexpected success of my first radio single “Home for Christmas”, which I almost didn’t send to radio. It ended up peaking on the Canadian Billboard AC chart at number 40 and was on the chart for a total of 5 weeks in a row. I never thought that would happen, but I’m so grateful for the people who shared, bought, and streamed the song.

I’m really leaning into the idea of being more of myself in 2021 and experimenting with different sounds and lyrical ideas. I’m currently writing an EP, with a lot of uncanny and ominous lyrical metaphors. It’s really exciting to be able to create your own box for yourself instead of being placed into one. Some of the samples on the EP are actually breaths that you could hear on my phone demos, that my producer and co-writer Derek Elliotson, thought would be neat to include.

There are probably too many people to name. In the Canadian world, I’d love to write a song with and for Mackenzie Porter, she’s a country artist with a vibe I can always get into. Shawn Mendes is also on my list as a songwriter and artist that I would love to collaborate with.

I’m still waiting for Taylor Swift to reach out to me for a co-write and performance, she’s probably my biggest inspiration, for all she has accomplished as a female who forged her way in the industry.