By Jordyn Armstrong on January 14, 2021@jordynhannah95 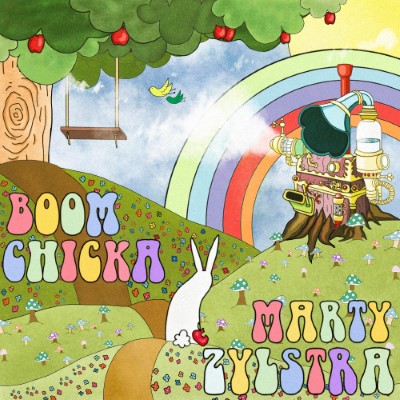 Marty Zylstra is back, this time with his very first solo LP! Boom Chicka is set to release tomorrow, January 15. The nine-track album features previously released singles such as “Sweet California”, “People I love”, and “Show Me How to Move”. I was lucky and honoured to be able to have an advanced copy to review for you.

Boom Chicka opens with “The Music” which is a alt-rock opener, with a classic yet modern twist. It’s one of those songs you can picture as the opening credits to a movie where the main characters are driving down a highway into the sunrise. Maybe think of the opening to Guardians of the Galaxy Vol. 2 where Peter Quill’s parents are driving in a convertible; but instead of “Brandy You’re a Fine Girl”, it’s “The Music”. I am a person who strongly believes an album has to open with a bang, and Zylstra definitely has achieved that with this song.

The album keeps up the momentum in the second track, “Rattle the Glass”. All I can think of while listening to this is how much fun Marty must have had while recording. It just seems like one of those songs that you can’t help but smile while singing along.

The following tracks are more in the indie-side, especially the singles that have already been released. However, the slight change in sound isn’t taking anything away from the album. It shows the diversity in the genres that Marty has under his umbrella, and he executes them so well. If you haven’t listened to “Sweet Carolina” yet, you should. Once you do, I’m sure you will understand what I mean.

The album finishes out strong with “People I Love”, in true Marty Zylstra fashion. He writes from his heart and you can hear that in every note to this song. He stayed true to himself, while exploring new and evolving techniques and styles. I think this quote from Marty encompasses the full essence of the album, and I couldn’t even say it better myself:

Most of these songs are about love, about life, and about the human condition. With some of the lyrics I wanted to stand on my own preverbal soapbox and tell the world my observations and opinions on fixing everything, if you will. We should stand together and love each other. I mean, why not finally give peace a chance – it’s good advice don’t you think?

And check out an interview I did with Marty last year, around the release of “Show Me How To Move”!