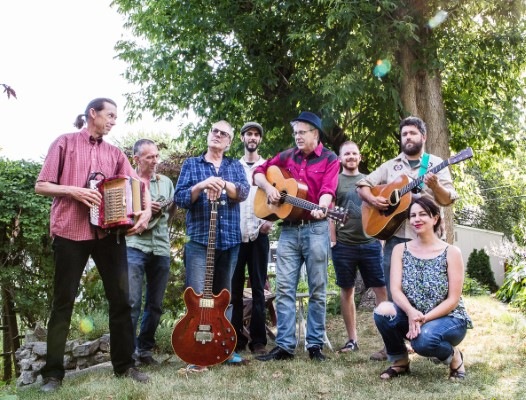 Ontario-based band, Grievous Angels have teamed up with Skydiggers frontman Andy Maize on their eighth album, The Summer Before The Storm.

The album is a kick-ass journey of hope in unsettled times. Angels frontman Charlie Angus says the idea of recording songs with Andy Maize has been on the band’s radar for years.

“We came of musical age together. We played the same clubs and shared the same songs. This is why we wanted Andy to join us on our new single Red Deer to Margaree. It is a song that has been traded back and forth between the Diggers and the Angels over the years. But this version captures where we are at today. It rocks.”

In many ways, The Summer Before the Storm is the most political album recorded by the Angels. Angus (whose day job is a Member of Parliament) says he didn’t set out to write a political album but many of the themes – conspiracy theory, climate crisis, PTSD, violence – have become a part of the larger cultural conversation.

“We wrote and recorded these songs on the eve of the COVID crisis – literally during the summer before the storm. I suppose we were channeling something of the dissonance and uncertainty around us. But I think the songs speak to the spirit of people to find a way through dark times.”

Check out the album below, and find out more about the band via our Five Questions With segment.

For the last three decades, the Grievous Angels have been carving out a unique place in the alt-roots landscape. We learned our craft by playing every possible gig from large summer festivals to punk rock dives to country dances at fly-in First Nation reserves. Along the way, we garnered a couple of Juno nominations, released 8 albums, and built a reputation for crafting some of the most heartbreaking blue-collar songs in the Canadian songbook.

The Angels have largely parked our longstanding touring tradition because leader singer/songwriter Charlie Angus was elected to Parliament. But that makes sense too. The new Grievous Angels album Summer Before the Storm is gritty and political. It provides a virtual roadmap through the dissonance and uncertainty of these troubled days.

The Angels are rooted in the songwriting of Charlie Angus. The songs have been compared to the best of Steve Earle, Lucinda Williams, and Stan Rogers. Angus writes of the struggles and lives of working-class people in his home region of Northern Ontario. There is a real precision in the lyrics with strong musical hooks.

The Angles band leader is stand up bassist Tim Hadley. Tim toured with Stompin’ Tom for many years is the Angels band leader. He organizes the musicians and the recording sessions. The band’s rootsy sound is anchored in the incredible skills of band co-founder and multi-instrumentalist Peter Jellard. On this recording, the group invited Andy Maize of the Skydiggers and bluegrass singer Janet Mercier to join in on vocals. The result is a mongrel mixture of rock-n-roll, heartbreaking country duets, swinging maritime accordion with just a touch of gospel. In other words, it is a classic Grievous Angels album.

How are you staying creative during the pandemic? For someone who has yet to see you live, how would you explain your live performance?

The pandemic hit just after the recording of the song Summer Before the Storm which is the closing track on the album. In many ways the song anticipates the troubled days that have unfolded over the last year. The band stayed focused on the mixing of the album throughout much of the first wave of COVID. It was done long distance and made possible through the incredible patience of our engineer/producer Nik Tjelios.

A Grievous Angels show has been described as a rowdy night at a northern Legion hall where the audience is invited to share in those unguarded moments where the characters in the songs reveal their inner struggles and uncertainties. But you don’t get to linger on these moments too long because the wild fiddle and guitar will have you back up on your feet in no time.

I think people should check out the track All Night Depanneur. It is not one of the more well-known songs. It is unlikely to ever be a single. But the haunting lyrics and musical accompaniment really captures the spirit of the Angels. A “depanneur” is a corner store in Quebec that sells wine. The song is set in a depanneur during a snow storm. It is a song about trauma, memory and the effects of war on the psyche. The song was written in the midst of the recording session and recorded in two or three takes. The instrumentation is almost all acoustic – guitars, accordion, mandolin. The rich mixture of vocals captures the loneliness of the night. This is a live off the floor performance.

We are big fans of Alex Bird and the Jazz Mavericks. Charlie Angus has done some writing with Alex for his last album Whisky Kisses. We love Sameer Cash’s new album. Dina Thorpe is a powerful voice who has shared some of her incredible talent at the annual Charlie Angus Hootenanny at the Horseshoe. We are big fans of Ben Caplan and Sun Harmonic (fantastic album). As far as the older generation of musicians go we love the Skydiggers and Fred J. Eaglesmith.