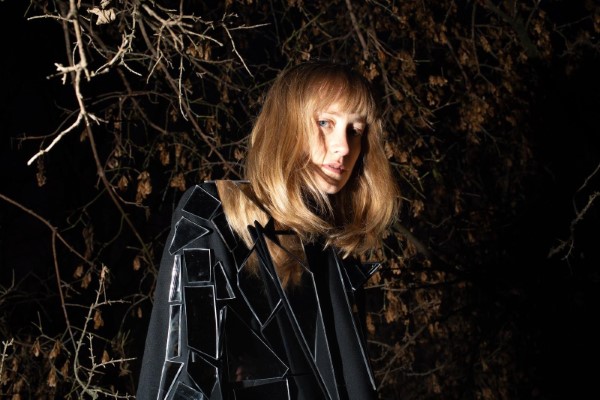 Toronto based band, The Weather Station – the project of Tamara Lindeman – reveals a new single/video, “Atlantic”, from her forthcoming album, Ignorance, out February 5th on Next Door Records.

“Atlantic” follows “Tried To Tell You” and “Robber,” both of which have received glowing praise, including Pitchfork and Paste deeming the latter one of the best songs of 2020. “Atlantic” furthers Ignorance’s sophisticated turn in sound, bursting with urgent percussion, flutters of woodwind and strings, and Lindeman’s cool voice. The song finds the narrator prone on a cliff, watching a sunset as frightening as it is beautiful, “blood red floods the Atlantic.” In the accompanying video which visualizes the song’s quiet terror, we once again see Lindeman adorned in her mirrored suit, though this time, she is front and center surrounded by her full band performing in the dimly lit woods. She aimed to capture the intensity of the band in a traditional music video performance video, but in such a way that it subverted the form in mysterious ways.

“Trying to capture something of the slipping feeling I think we all feel, the feeling of dread, even in beautiful moments, even when you’re a little drunk on a sea cliff watching the sun go down while seabirds fly around you; that slipping feeling is still there, that feeling of dread, of knowing that everything you see is in peril… I feel like I spend half my life working on trying to stay positive. My whole generation does. But if you spend any time at all reading about the climate situation circa now, positivity and lightness are not fully available to you anymore; you have to find new ways to exist and to see, even just to watch the sunset. I tried to make the band just go crazy on this one, and they did. This is one where the music really makes me see the place in my mind; the flute and the guitar chasing each other, wheeling around like birds, the drums cliff like in their straightness; I love the band on this one.”

Through Ignorance, Lindeman has created a novel sonic landscape for The Weather Station. It is sensuous, ravishing, as hi-fi a record as Lindeman has ever made, breaking into pure pop at moments, at others a dense wilderness of notes; a deeply rhythmic and painful record that feels more urgent and clear than her work ever has. The natural world is everywhere on this record, intruding with force and poignancy.

The lyrics across Ignorance roil with conflict. “I used to be an actor, now I’m a performer,” Lindeman says. In those roles she often finds herself to be the subject of projection, reflecting back the ideas and emotions of others. In turn, the album cover shows Lindeman laying in the woods, wearing a hand made suit covered in mirrors. Throughout Ignorance, she sings of trying to wear the world as a kind of ill-fitting, torn garment, dangerously cold; “it does not keep me warm / I cannot ever seem to fasten it” and of walking the streets in it, so disguised and exposed.

The Weather Station will present a full band performance of Ignorance in its entirety on Thursday, February 11th.