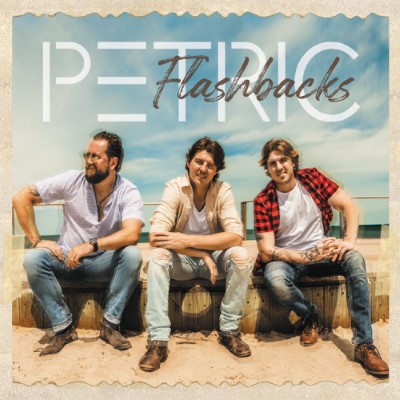 Petric is an award-winning country music trio from Transcona (Winnipeg), Manitoba who, on January 13, released their much-awaited debut full-length album, Flashbacks. This is an album that they, for the first time, had full creative control over and were also able to use their own band members playing their own instruments. This is also an album where Petric did all the songwriting. It has nine solid tracks on it and had Petric team up with Grammy-nominated, Canadian producer Chris Baseford (to guarantee it was done well) who’s worked with Canadian artists and superstars like Avril Lavigne, Nickelback, and Meghan Patrick.

2020 wasn’t the year that Petric was hoping it to be, and as artists, they must have scratched their heads and wondered how want they would move forward, along with the rest of the music industry. How would they adapt to the change that was happening right before their eyes: quarantine, lockdown (not even being able to get into a studio to produce their music), and no festivals or concerts? And, how do artists including this trio stay in the game with all the challenges the pandemic threw their way? Well … Petric took what was a terrible circumstance and made it an extraordinary one with their passion, persistence, camaraderie, and hard work – and because of all of that: Flashbacks has arrived, marking a new beginning for Petric in 2021.

“Writing and recording Flashbacks took us from New York to LA, and all over Canada. By the time this album will be released, it will have been over two years in the making. This has been a journey, full of creation and discovery. We’re very excited to be able to share this next part of the journey with all our fans.”

So, let’s get into this album. I’ve been lucky enough to see firsthand how Petric has grown over the last eight years. With this growth came Flashbacks. It’s their best yet and they have opened 2021 with their new brand of music for all of Canada and the world to hear. I think something very special presents itself throughout this compilation of songs. I’m talking about brothers and their harmonies. When Tom and Jason sing, they have unique harmonies; their harmonies are truly a one of something kind. The special blend of tones from each brother is like a single instrument that only they possess. No one else can buy it and it can’t be duplicated. This album is full of happy, upbeat songs, deep-meaning ballads and everything in between. Six of the nine tracks have already been released as very successful singles.

In  2019, “Something To Do With You” and “Single Problem” were released. Both are toe-tapping, catchy, upbeat tunes that you want to play over and over again. “Single Problem” garnered over one million streams and was the highest-charting single by an independent artist in 2019 (peaking at #19). Pretty impressive!

Fast forward to the summer and fall of 2020. Petric found an opportunity that was unique to them when they decided to start releasing singles in short order. Three in fact – much to the delight of their fans.

On August 25, “Déjà vu” was unleashed. Because of the lockdown, this single was recorded from all of their home studios (with a lot of help from their producer). This song shows a completely different style and edge that the band hasn’t ever explored before. It has great energy – it’s a dance in your chair song.

On October 5, Petric released “All Who Wander.” This is a song that Petric has been sitting on for the past five years. It was decided that this was the moment that it should be heard because this song speaks of the beauty that this world has to offer, of hope and faith, of knowing that there are better days to come again.

November 13, another track from the album was presented to their fans. It’s one so different from any other previous release. “If I Was Your Man” is a tender, heartfelt ballad, one of unrequited love that showcases an emotionally rich, introspective solo by Tom.

Now we’re into 2021. True to letting their fans know that they will keep their singles coming, Petric opened up this New Year with the release of “Kids” on January 4. (On January 11, it was released in Australia  – way to go guys!) This one has us reminiscing back to the days of high school – back to our first love, our first car, and all those great memories from the special time in our lives. It’s fun, it’s upbeat and it brings a smile to my face. “Kids” also debuted as the #1 most downloaded country single in Canada! Well done Petric.

“This song is Petric, everything a band can do in on display. It captures everything that is great about the band.”

There are three songs on this album that have yet to be heard prior to the release of Flashbacks: “White Lying’,” “Autumn Leaves” and “Safe With Me.” These are ones that go straight to your heart. Tom’s “best” comes out when he sings ballads. His voice is full of emotion in his interpretation of “odes to love,” emotions that come from deep within him and from his heart. In turn, Tom’s voice reaches deep down into your own heart to leave a lasting emotional impact.

Each of these three tells a simple yet elegant story. “White Lyin’” is a soulful ballad that is so powerful, and the lyrics really pulled at my heartstrings. “Autumn Leaves” is a love song and a very sweet ballad. “Safe With Me” is a song that makes you believe in love again.

I believe that Petric has worked hard to get to this point in their career. Because they love their craft and aspire to be the best that they can be, they set out to prove to themselves and the industry that if you want to make IT happen, you can!

Flashbacks happened because of IT!

The best thing that you can do for Jason and Tom Petric and longtime friend Jordan Day is to buy or stream Flashbacks. It really is a MUST add to your collection.

To purchase a physical copy of Flashbacks, go HERE.