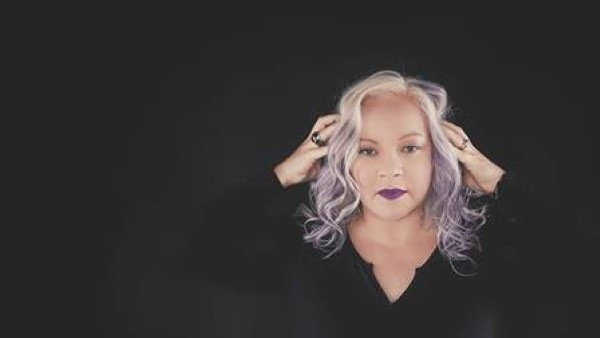 “This song came to me in a sudden rush,” the multi-talented Canadian singer/songwriter recalls. “I sat at the piano and was astonished at how quickly it flowed out of me.

“It was like it had been poured into me.”

The third single to shine from Katie’s debut album, Spare Skirt, “The Moon” is a song about secrets and reflects the anxieties of these inauspicious times. There are three characters in the lyric: “I,” “you,” and “the moon” — the narrator, someone who keeps secrets, and someone who knows everybody’s secrets, respectively.

“I’m fascinated when people tell me which character they identify with, and whom they cast in the other roles,” Ditschun explains. “It’s definitely open to interpretation; one friend said they thought it was about the loss of privacy in the digital age, and another said it resonated with her experience growing up closeted in a small town.

“Given its relatively simple song structure, I realized I needed to stretch it out when it came time to record,” she continues. “The idea of this enchanting extended cello solo as a middle section just struck me as perfect for the song as a whole.”

Cellist Noël Campbell stepped into the moonlight, per se, to fill the role; he also stars in the video. Filmed amongst the marshes on the Glengarry Trails in North Glengarry, Ontario, the video also features a goat named after one of the G.O.A.T.’s — Johnny Cash.

Check out the video below, and find out more about Katie via our mini-interview below.

Hi! I’m Katie Ditschun, indie singer-songwriter inspired by a variety of genres. As a vocalist I love being a storyteller, using my voice to move the listener with lyrics grounded in metaphor framed by music built upon simple yet beautiful melodies.

Tell us about the writing process behind “The Moon”.

Writing “The Moon” was one of those rare moments for me where the chords I played on the piano seemed to completely inspire the lyrics. When I’m working on a new song, usually I start with a draft lyric, or just a verse or chorus, but with this song I played a few chords and the full lyric seemed to just come to me. It felt like a revelation. I’d love to know what my muse was that day, because I’d sure like it to haunt me again!

The plan to shoot this video was late September, but things kept coming up and getting in the way. Then finally at the beginning of November the stars seemed to align again for this song. All our schedules were in sync and the weather was perfect. The moodiness of the clouds, the wind in the marsh, the bare trees, it all just worked. To top it all off, Noël Campbell (cellist; who plays the role of The Moon) and Madeline Gerow (as The Girl) were easygoing and willing to tromp through the scraggly woods to get some really beautiful footage.

I plan to make this another year of forward momentum. I’ve got places I want to perform, songs I want to sing, and more songs to write. I have a few songs waiting in the wings ready to record, so a late 2021 release of an EP is a big part of this year’s plans.

Like dream collaborators? Sting and Cyndi Lauper. But until they give me a call, there are a couple of local jazz pianists that I’d love to work with, such as Steve Boudreau (Ottawa) and John Sadowy (Montreal). I’d be over-the-moon if one of them recorded one of my jazz ballads with me for my EP.