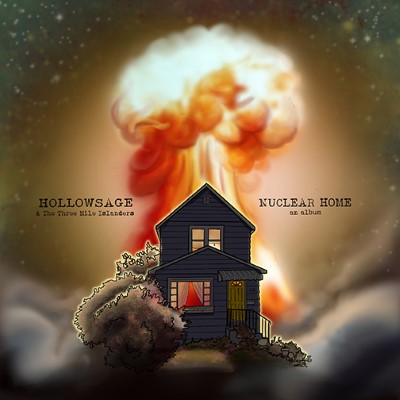 As someone who clocks in and bears witness to the frontlines of human grief on a near-daily basis, it’s understandable that the up-and-coming musician would cover the ground of dark subject matter.

Monsters, death, and darkness… You name it, he’s written it.

Ultimately though, Sagen always wanted to use his platform and natural storytelling abilities to share soothing songs for people who are struggling with the unfortunate and necessary truths of life; as a body of art that might help them cope with the bittersweet nature of reality.

Prior to “Haunted,” “Monsters” and “Naturally Disastrous” were released as standalone singles before the release of Hollowsage & the Three Mile Islanders’ debut album, Nuclear Home, this past February. As described by Sagen, Nuclear Home is a collection of folk tracks filled with stories of heartache, honesty, and overall hope.

Check out the video for “Haunted” below and find out more about Hollowsage via our Five Questions With segment.

Hello! My name is Sagen (Say-jen) Pearse, I hide behind my moniker Hollowsage and back when we were able to play shows, I hid behind the musical talents of my band “The Three Mile Islanders’ ‘. Not to say I have stage fright or anything like that, they are just much more musically talented, like they know keys, time signatures, and notes and I just strum along with my detuned guitar. So I will introduce them first.

Kevin Ker plays electric guitar and produced our debut album “Nuclear Home”. He is also the reason why I play my music publicly. Before my songs were reserved for me and at times my mother, who is and will always be my biggest fan (besides my wife… I hope.) He encouraged me to play my original songs at a local open mic he hosted in Markham, ON. Without him, I would not have the growing catalog of music under my belt and would still most likely be belting my favourite Dan Mangan covers instead of my own songs. Kevin is the frontman of Future History, Man Made Forest, and has a great side-project called “The Unraveling of the Drifting Cosmonaut.” Kevin owns and operates the Chandelier Room recording studio just north of Stouffville, ON, where we will be recording the next album later this month.

Justin Dillon is our drummer extraordinaire. Justin is an extremely talented percussionist, performing in a number of other projects including, but not limited to; Man Made Forest, Future History, and a psychedelic Grateful Dead tribute band called “The Mark T. Band”. He brings his A-game to every single recording and performance no matter the genre, creating patterns and effects I have never heard from a drum set. As a veteran session drummer, Justin was key in my first recording sessions at Union Sound in Toronto. I was having a difficult time playing along to a click track and getting quite upset at myself over it, so we played it live off the floor, BEST METRONOME EVER!!!

Quincy Bullen plays bass and keys in the band, but that does not give justice to his musical prowess and accomplishments. Quincy is a concert pianist by trade, performing alongside his father Eddie Bullen and his brother Tre Bullen in a world-touring project called “The Bullen Family.” Quincy also performs in a solo project involving live electronic music, which is extremely impressive. Quincy brings a lot of heart and soul to the Three Mile Islanders, he can rock heavy when required and tones it right down for the more intimate times. He is also very patient and explains musical theory to me in a way where I almost get it.

As for me, I can remember the first chord I played right as a kid. The notes resonated perfectly through the kitchen where I would practice. My teacher was proud of me at the next lesson. We would sit facing each other in a makeshift path carved out between music magazines and guitar cases that piled higher than anything I’d ever seen. A “hoarder with good taste,” my grandpa called him after picking me up from a lesson that would often, if not always run well over the allotted time. He was a patient man, always watching carefully at my fingerpicking and keeping time along with me as if a human metronome tapping his foot. He encouraged me to play in my own style and to not try to be like everyone else. However, this backfired stupendously when show and tell came around and I brought in my classical guitar, sheet music, and footrest. I played my nine-year-old little heart out for twenty minutes, covering songs my class had never heard of, nor did they ever want to hear of. Simon and Garfunkel was not very popular in my grade, nor were The Beatles at the time. To no applause, I packed up and was subsequently teased for the next few weeks for not knowing how to play cool songs like, Pretty Fly for a White Guy, which was all the rage at the time. After this experience, I quit going to my lessons, and I would play only in the privacy of my room.

Fast forward through high school, college, and an internship at a funeral home in Kenora, Ontario, I finally began to write. Maybe I needed some life experience, a few breakups, and my own dealings with grief to finally start my own musical journey. The first song I ever wrote was Monsters, it derives from an acid trip my dad had when he was at a Christmas party in the eighth grade. His “friend” had spiked his beer and my dad had to walk home, hallucinating the whole way, thinking there were monsters between each set of streetlights and believing he was taller than the houses on his street, all of which were decorated with Christmas lights, boy what a trip. The song also deals with trauma I experienced as a young boy, not to get into too much detail but the “Darkness in those evil men’s eyes” is no metaphor. I think it is important to share grief and trauma with people, because everyone has their fair share of it, and it helps to know you are not alone. I use my own experiences in my music and my work as a funeral director. Helping people through one of the worst experiences in their lives is extremely rewarding. People know when you are genuine, people can tell if you are just putting on a mask of sympathy. So, I try to always be the person who I would want helping me if I was in the same situation. It is the same thing with my music, I write and play songs that I would want to listen to. I try to be genuine and heartfelt with my lyrics and my performances because people appreciate that… Hopefully.

Songwriting for me came out of an abundance of poetry writing. The poetry writing came from an abundance of listening to The Fugitive’s debut album In Streetlight Communion and Shane Koyzcan’s album Shut Up and Say Something on repeat until I knew every word of every track. These poems turned into songs which I was afraid to sing. I knew I could sing, but I thought the songwriting police were going to arrest me for not having a bridge or traditional chorus. I was always very hesitant to share my work until I received that aforementioned push from Kevin Ker. As for the content of the songs, I write from my own unique experiences. Working at a funeral home has given me a lot of perspective on life, our interactions with one another and of course death. My debut album Nuclear Home, which was released in February of 2020 right before the lockdown, is a collection of songs which all mean something deeply personal to me. Many were written for an ex-girlfriend who is now my wife, some were written about the death of a marriage, or a family member, or a religion, while others were written to acknowledge my personal monsters and ghosts. For me songwriting is healing, like a bandage on a shotgun wound, it won’t fix everything, but the fact it is there and trying to help means the world.

At the beginning 2020 I played my album release party with The Stephen Stanley band at Rivoli in Toronto. It was supposed to be the first of many to support the album and a tour was in the works, but a little thing called COVID-19 had other plans. During the initial lockdown I took part in a songwriting challenge hosted by Kevin Ker (I swear we aren’t in love, he’s just an integral part of my life), during which I wrote a song a day for two weeks. After this I started performing weekly live streamed shows to keep the music flowing. In the summer I had the opportunity to play at Uxbridge’s “Banjo Cider” and “Second Wedge Brewery”, both of whom have done everything they can to support local music safely. My now wife, at the time fiancé, and I spent a good chunk of the year planning a wedding we didn’t know if we could have. In the end we got married in our backyard and live streamed it for our guests, it was awesome. In November my wife surprised me with a writing workshop with one of my favourite poets, Shane Koyzcan. I still have chills from the experience. Since the workshop I have put together a book of about sixty poems I have written over the years, all of which will be illustrated by my wife. As for 2021, I am heading into the studio to record another album, and I am very much looking forward to it.

I would most likely suggest listening to Great Lake Love. It is a really simple song which sums me up as an artist quite well. The lyrics create a visual in my mind’s eye that I like to share. It is a song of hope and optimism, which are two things I think the whole world needs right now.

Right now I have a constant playlist of the following Canadian artists, all of whom have had an enormous influence on me as an artist and a person.