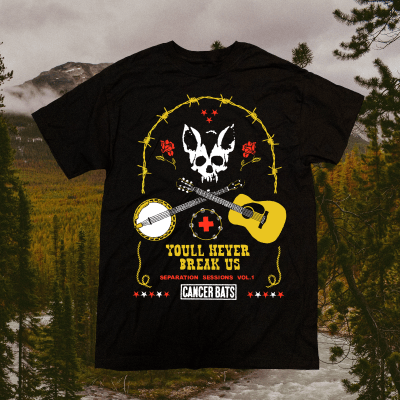 This is some of the heaviest acoustic music you’re likely to hear from all of 2020. On You’ll Never Break Us: Separation Sessions Vol. 1, Toronto’s Cancer Bats take a handful of choice songs from their discography and retool them into something a little less harsh, but still hard-hitting.

With this re-envisioning comes a batch of altered titles that pay homage to their originals while making clear that they are notably different. “Deathsmarch” becomes “Deathsmarch to a New Acoustic Beat,” while “Lucifer’s Rocking Chair” is now “Lucifer’s Slightly Less Rocking Chair” (slightly is correct; this version of the song still absolutely rocks). These toned-down updates in no way erase the hardcore punk and metal feel that the band has delivered so skillfully throughout their career. Songs like “Black Metal Bicycle My Blues Riffs Away” and “Darkness Lite” require no excess of effects or amplification to tap into a listener’s adrenaline, while the brisk rhythms of “Bed of Nails, Dreams of Tambourines” and parts of “Road Sick Sick Sick So Stay Home” in particular could easily incite a crowd into a mosh pit. The guitar and bass riffs in their more subdued form prove their intrinsic heft, while edgy vocals and booming rhythms continue to exist on all tracks. Some distortion is also present, but sparse, the overall effect being something that is largely clean yet gritty.

These songs may be mostly unplugged, but they’re ferocious—a very cool take on the louder powerhouse hits they were formerly designed to be.