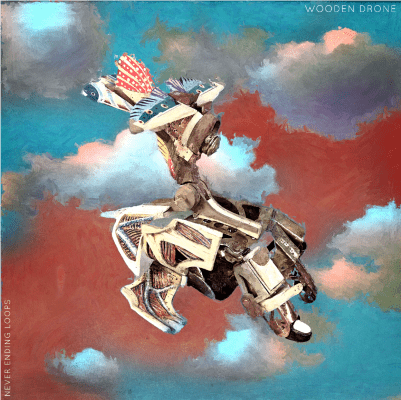 The album was produced simultaneously with the game We Happy Few at Compulsion Games. The result of meticulous work that lasted a total of 10 years, the album has already reached 11,000 listens for “Le Loup Bleu”, one of the 14 featured compositions.

Check out the album below, and find out more about Wooden Drone via our Five Questions With segment.

My styles vary a lot between, Electro, Glitch, Dance, Jazz, and Trip-Hop. I like to blend those styles together or alternate in intensity between a good banger or some smooth and melodic jazz or funk vibes. I’m always surfing between the warm texture of old instrumental samples and the cold sharpness of retro synthesizers, but generally, I feel the tastiest recipe comes from mixing both, trying to find a space of harmony between them.

On top of this, I always try to create a feeling of existence of the sounds in space, for the listener to almost be able to pinpoint the direction of the sounds, the space in which they exist, to give the synth or samples some kind of material properties.

Finally trying to find the perfect balance between simple exiting melodic grooves, impossible to hate and the complexity or strange composition of a good experimental song which that will haunt you, is a never-ending challenge I give myself, but in the end it’s all about instinctively making something I’d actually want to hear.

No sadly and probably not in the near future, my composition has always been static and a slow process, kind of like doing scrapbooking or some collage art, but I recently shifted my production techniques and started doing some live recording and mixing, so I’d like for my upcoming material or next album to be fun and easy to set up for performing live!

Even if everyone seems to always favor a different one of the 14 tracks in “Never Ending Loops”, I would suggest my personal favorite, featuring probably some of my most unique and iconic sounds; “Felicia Love” which again, will be the first clip I’ll make for this album.

On the top of my head, I would go for Caribou since it was a major influence in my beginnings, Paupière which is probably my favorite band in Montreal right now and Kaytranada who is now certainly one of the most acclaimed beatmakers from Montreal.