Home / Interviews / Five Questions With The Keen & The Kind

Five Questions With The Keen & The Kind 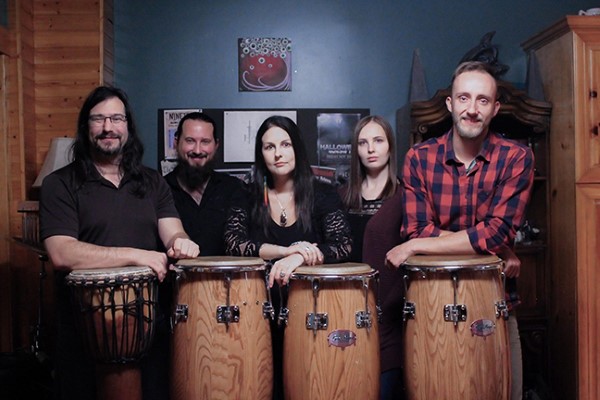 The Winnipeg-based five-piece, made up of Violet Vopni, Clinton Giesbrecht, Kevin Cote, Alana Giesbrecht, and Stephen Chubaty have released their critically acclaimed debut album, Unacknowledged, earlier this year under their former moniker, Nineteen, and were featured on CBC’s Up to Speed, the Indigenous Music Countdown, and Manitoba Music’s Song of the Week.

Now, the band increasingly known for their expansive range in easy-going upbeat pop to groovy smooth jazz to thought-provoking emotive folk is putting the finishing touches on a forthcoming deluxe LP, The Things We Don’t Know, set for release this June 2021.

The first release from the upcoming offering, “Joseph”, attentively ushers audiences into the fractured legacy and aftermath of Vopni’s lineage, and the story of the song’s namesake, her great grandfather Joseph Huppe.

“Joseph was born in 1900, fought in WWI in 1916, and married my great grandmother, Jenny, in 1923,” Vopni says, setting the scene. “They had four children, Harold, Allan, Doris, and my grandmother Beatrice.

“Joseph was Métis but, being born 15 years after the Northwest Rebellion, he was forced to keep his identity a secret,” she explains. “I think he kept his secret to avoid being sent to a residential school; Métis people were known in those days as being in between because of their combined French and Indigenous lineage so Joseph’s story is one that’s common to Métis people born in the last 135 years.”

Vopni, who serves as The Keen & The Kind’s lead vocalist and songwriter, penned the sonic portrait to shed light on how moments in history can ultimately affect us as people hundreds of years later.

“Joseph struggled through alcoholism, he struggled to find where he belonged and, ultimately, he left the family; we do not know what happened to him,” Vopni shares. “What we do know is that he left a woman to raise four children on her own in the 1920s and 30s, and those children subsequently went through traumas of their own — Allan died in WWII, Doris was murdered, and Beatrice became an alcoholic and was married to an abusive man.

“Beatrice passed that trauma to her only child, my mother Kim, who in turn passed that trauma down to me,” she reflects. “So we know a lot about the people Joseph left behind in the world — his wife, his children, his grandchildren, and his great-grandchildren — but we don’t know a lot about him. This song is about how his life affected the lives of so many others; it’s about who he left behind, and the wounds that cut so deep.”

Check out “Joseph” below and find out more about The Keen & The Kind via our Five Questions With segment.

Violet: Metis and Icelandic singer/songwriter and lead vocalist Violet Vopni. Violet has been writing songs since 1995, she draws inspiration from her experiences with childhood trauma and generational abuse. It took her a long time to gain the courage to find bandmates and release songs she wrote 20+ years ago. When she’s not working on songs for The Keen & The Kind, she’s writing music with alternative metal band Helfreya, playing DnD, and watching duck videos on the internet. You can follow Helfreya @Helfreyaband.

Clinton: The most versatile guitarist you’ve ever met, Clinton Joel is a multi-instrumentalist, music teacher, songwriter, and session musician. Clinton started playing piano when he was 5, developed a killer ear for music, picked up a guitar when he was 14, and never looked back. While he’s the youngest member of The Keen and The Kind (he’s 23!), he’s super talented. A lover of jazz, blues, oldies rock, folk, and alternative indie pop, Clinton is always writing some kind of challenging guitar line. When he’s not playing music with The Keen and The Kind he’s working on his upcoming instrumental album. Follow him on Instagram @clintonjoelmusic

Kevin: Kevin Cote, the crazee percussionist who plays just about everything from chip bag shakers to the kitchen sink. He’ll “chime” in when we need a magical moment while keeping the base rhythm locked down on the many different drums he plays. From triple congas, bongos, doumbek, Ngoma, Djembes, to accents instruments like cymbals, shakers, tambourine, chimes, cowbells, vibraslap, He’ll even occasionally bring the gong to the show! (No really, he has an actual gong.) Although he’s busy supporting many local original acts such as  Stacey James Band, Ashes and Dreams, The Mighty 10:01, and others as needed, Kevin is very excited and thrilled to record and perform with The Keen and The Kind. Follow him on Instagram @crazeecongadude

Alana: Coffee shop waitress by day, back up vocalist by night, Alana Giesbrecht is our secret weapon. Passionate about music and active in the church community, Alana has been singing and playing guitar throughout her childhood. Singing alto in many choirs throughout her high school years has provided her with a strong ear for harmonies, and Alana uses these skills within The Keen and The Kind to add emotion to each song. In her spare time she loves photography, nature walks, calligraphy, and traveling. In 2017 she spent a year in Norway with her now-husband Clinton Joel.

Stephen: Indigenous singer/songwriter Stephen “Circling Coyote Man” Chubaty. His spirit name comes from his Cree roots and his ancestral home in Peguis, Manitoba. Stephen is a multi-instrumentalist and vocalist who plays trombone and harmonica for The Keen & The Kind. Stephen has a melodic bass growl, a vibrato remnant of Louis Armstrong, and a clean vocal sound like Johnny Cash. When he’s not playing the harmonica, he’s the lead vocalist for thrash metal band Dark Messiah. Violet Vopni is his fiancée. Follow him on Instagram @stephenchubaty and @darkmessiahmetal

Our music crosses genres but can easily fall into indie pop and indie folk, with a bit of jazz, Latin, and blues mixed in.

The writing process is truly unique. Violet is masterful at writing lyrics and melodies, Clinton has an ear for music like no one else, so the songs really start with the two of them figuring out the feel of every song, how it’s going to sound, what story is being told, and what kinds of emotions we’re going to invoke in our listeners with the song. Kevin joins us once we have the acoustic version of the song, adding in percussion (not drums), and then Alana adds in harmonies and Stephen adds in harmonica in just the right places. When recording, Clinton will also add in electric guitar overtop of his acoustic track. It’s a fun and often quick process as Violet and Clinton can get together and write the acoustic versions for four or five songs in a couple of hours.

We’re working on songs! Violet and Clinton are expanding upon what they’ve done in the past and writing songs that are a bit tougher to figure out, but have some amazing hooks that will capture listeners once they get it down! We’re sticking with our pop and folk trends, continuing to be storytellers, and enjoying the times we’re allowed to jam. Winnipeg went into a nasty code red situation whereby our province prohibited us from allowing people outside of our household into our home. So we’re not even allowed to jam right now, and we’re not sure when the orders will be lifted so we sometimes video chat and talk about our upcoming releases and plans for online promotion. We do still get the odd online concert opportunity which is always wonderful. We can’t wait until we’re able to jam again, see each other, play at a venue, tour, everything.

Our first single “Joseph” is the one to listen to right now, it’s been interpreted in a variety of ways by listeners, but for us, it’s a song about going to war, PTSD, alcoholism, and generational abuse. We wrote this song to highlight the life of Vopni’s great grandfather Joseph and the struggles he had as a Metis boy growing up over 135 years ago in Manitoba.