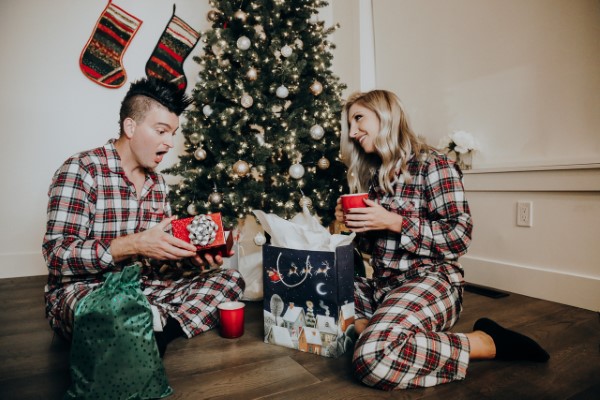 Mike Ayley previously made a name for himself as the bassist for double platinum Canadian rockers, Marianas Trench. Over the course of their 14-year career, the band released multiple gold and double-platinum singles and two double-platinum albums. With a JUNO win, multiple nominations, and five MuchMusic Video Awards wins, they cemented themselves as a staple in the Canadian pop-rock landscape.

What were your holiday memories like in previous years? Why does Christmas mean so much to you?

Christmas has always been about time with family and loved ones to me. That part of the day where everyone is just kind of in limbo, relaxed, not talking much but happy…that has always been one of my favourite times. Everyone is just “there”. We’re all together. All the chaos of settling down at whichever home is the central gathering spot has passed and there is a really nice feeling of warmth, comfort, and peace in the home.

What were some of your favourite Christmas songs or holiday albums? Did they lend any inspiration to your new single?
I love Christmas to this day but there is nothing like those first Christmases when you’re a kid. There is a whole extra feeling of magic in the air that just can’t be recreated as an adult. So, my favourite Christmas songs are mostly the nostalgic ones I remember from that time-The Raffi Christmas album was in high circulation on Christmas eve in the Ayley household. “Feliz Navidad” has always been a favourite of mine, as well.  As an adult, this year in particular, I have really grown an appreciation for all of the Michael Buble songs. He does such a great version of everyone he records. I have also been enjoying Kelly Clarkson’s “Underneath The Tree” when it comes on the radio in 2020.

What was the conversation between the two of you when the idea of a Christmas song came up? Why was this song so important to release in 2020?

We had discussed doing a Christmas song casually for a little while. However, the real impetus for writing the song took place during the summer. We were booked to Travel to see Emily’s family, who live in New Jersey, and due to covid, we had to cancel the trip. It wasn’t the first time we had to cancel a trip to see them in 2020 and this time it really hit hard. Not knowing when the next time you will see your family is pretty heavy. Rather than let it be an event that defined the rest of 2020 for us, we decided to use that experience as the main inspiration for “The World Needs Christmas” and write with the perspective of hope and optimism rather than defeat and sadness. I think we have all experienced enough hardship and compromise in 2020. It was important to us that the song would leave listeners feeling lighter and that brighter times were ahead.

Emily, congratulations on your vocal debut! How were you feeling during the recording process? Were there any nerves or did the experience feel natural?

Yes, of course! The actual process of releasing the song didn’t have me nervous, but the process leading up to it was all new to me. Recording in a big studio, doing a photoshoot, press interviews & a music video were all firsts for me. I was nervous but excited at every step. Every milestone left me with a feeling of “Wow, that was fun, let’s do it again!”

What’s given you both comfort and hope this year that you want to pass along to our readers and your fans?

We have been very lucky to be together. I often wonder how hard this would be living alone. We are each other’s best friends and we each have the ability to balance out the other when they are losing their bearings or getting down. We have been quite active physically. I find exercise is a really effective way to keep mentally and emotionally strong. We are both great at keeping each other motivated with that!!

Working on this song (and others) has been a wonderful use of this time too. It’s really been very rewarding to be able to continue to create even though the usual tools have not been at our disposal.