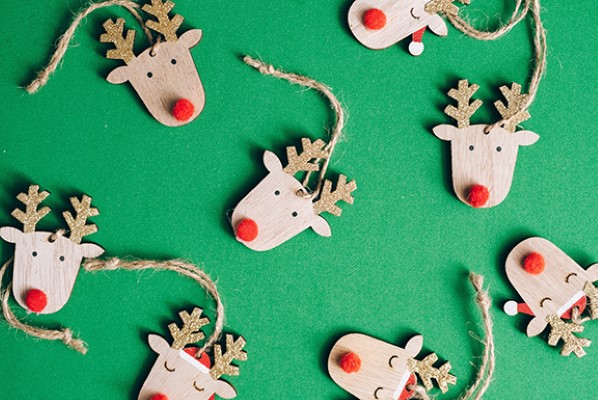 “The coronavirus pandemic had a multi-pronged effect on me and my creative outlook,” Cugno says. “First, it made me stop feeling sorry for myself as I realized just how lucky I have been and still am. Many have not been so fortunate as a result of the pandemic.

“Second, it made me take stock of what really matters to me and gives me a sense of purpose, which is making people feel good… Making them smile and laugh. God knows, we could all use more of that in these times.

“Finally,” he adds, “with less voiceover work coming in, I had more time on my hands to get in my studio and focus on creating music that would make people feel good. Despite the unfamiliar territory of writing in this style of music, “Reindeers Away” just came pouring out of me, and I figured if it makes me feel this good, then hopefully it can do the same for others.”

The track is written, composed, and produced by Cugno, with big band arrangement by Cristiano Calaresu.

Check it out below, and find out more about the Peter Bloom Band in our Five Questions With segment.

My name’s Peter Cugno, and I’m the Peter in Peter Bloom Band. Actually, I’m the Bloom and the Band as well. I’ve been a singer, a drummer, a singing drummer, and a drumming singer. I generally write my songs on guitar or piano. As for my guitar and piano skills…let’s just say, I’m a good drummer. I was in a couple of locally-known bands as a kid back in Montreal, and then moved to Toronto, where Peter Bloom Band eventually came to be. I landed a national distribution deal for my first and only solo CD, and showcased in a number of cities, such as Nashville, L.A., and Vancouver. Although I had a couple of minor brushes with so-called “success” in the music industry, I have seen more airplay and recognition as a result of my original satirical and parody songs, many of which are about hockey. Most of those tunes were created when I was a morning radio personality (“Scary Pete”) in Toronto and Hamilton for several years, which led me to my main line of work: voiceovers. I pay most of my bills doing voiceover work. I work in English and French and do everything from TV and radio commercials to jingles and cartoons. The most recognizable project I am currently involved with is Paw Patrol (I play François Turbot). I have yet to be able to make a proper living off my music, but I never say never…there’s always the next song!

Although my writing style has at times been somewhat fluid over the years, Peter Bloom Band is the culmination of my past indie rock experiences, as well as my rather eclectic and somewhat older-school musical tastes (classic rock, folk, Motown, country, reggae, etc.), served up with a big scoop of Britpop (60’s-90’s), a spoonful of Americana, and even a dash of gospel thrown in here and there, for good measure. It’s a hearty musical stew, with flavours of the Beatles, Queen, Springsteen, U2 , Keane, Stereophonics, and ’68 Elvis. So far, apart from the occasional detour into other vibes (including my most recent foray into big band jazz with my Christmas song, “Reindeers Away”), the vast majority of my creative output has been rooted in rock. That said, I would like to think that my sound is not stagnant, but rather ever-evolving, so who knows what will come out next?! As long as it connects with people and makes them feel good, or moves them in some way, then I’ll be happy.

Mostly “The 3 R’s” – (W)riting, Recording, and Renovating! I spend an inordinate amount of time in the home studio I built, and on which I am still putting the odd finishing touch. I audition for voiceover gigs from there, and when I land a gig, I record it there as well, since the pandemic prevents me from working at the usual downtown studios. Apart from doing voiceovers, I’m writing songs, such as “Reindeers Away”, and working on some music with my daughter. We’ve actually done a couple of “COVID Concerts” out of our garage, for our neighbours to watch (at a good social distance) from the alley or from their balconies. I am also developing a few ideas for some entertaining web content, which will incorporate my musical skills as well as some (hopefully) humorous elements of my creative self. Lots more to come in 2021!

“Let It Go”. No, not the one from “Frozen”! This was the lead-off single from my solo record, “Random Thoughts (from a paralyzed mind)”. It’s a song about the struggle to let go of something that you know is either bad for you or just no longer works for you, but still provides some sense of normalcy. It could be a relationship, an addiction, a job, whatever. Despite the potential harm being done, there is often a sort of comfort found in those things, and we may even feel that by extricating ourselves from that situation, we are in effect “giving up”, or “surrendering”. The truth, however, is that , “surrender’s not the same as letting go.” It’s probably the best showcase of my pop songcraft and emotional dynamics, with vocals that go from vulnerable to soaring. I am also particularly proud of its lyrical imagery. That said, other top contenders would be “Walls”, “Careful” and “Haven’t Hit the Floor Yet”. The album is a story of the human condition, in all its flawed glory, with each song being a chapter of that story. Combined, these latter three songs in particular paint a vividly layered picture of how one might see oneself in relation to the world around them. Should they give it a listen. hopefully, people will indeed see themselves in the music, and feel a real connection.

I must confess that lately, I haven’t been as tapped into the current Canadian music scene as I would like to be, but if I had to name three artists, they would be the following:

i) Luna Li – I have just recently found this remarkable artist. A classically trained multi-instrumentalist (violin & piano being her main ones) and experimental singer/songwriter, who just draws me in with her lush arrangements, stellar vocal layering, and fresh production. Her music might be at least partly rooted in classic influences (The Beatles definitely come to mind), but there is so much more to her sound than that. The enchanting blend of sweet vibes is truly unique to her. Her single, “Trying” is simply beautiful. “Afterglow” is another gem (love the “vinegar smiles” line). I want more…and so will you.

ii) Justin Nozuka – Many people make music. Few among them make truly beautiful, lasting music. Far fewer still ooze music from every pore. Justin Nozuka is one of those very few. He is indeed a current artist, although at 32, he has been on the scene now for some 15 years. His debut album, “Holly”, written and recorded when he was only 17 or 18, was a masterpiece of acoustic soul, and I am honoured to have co-written a track from that record (“If I Gave You My Life”). It still sounds fresh today. His three subsequent releases all shine with true, unfettered, unadulterated artistry, which is perhaps why he has, as of yet at least, not become quite the household name many expected him to become. True artists, pure artists can rarely if ever be packaged for mass consumption, without the art and/or the artist himself or herself losing something in the process. Justin and his art have not lost a thing over the years – his voice and his music can still stop me in my tracks. If you are unfamiliar with him, do yourself a favour and check him out. You will become a lifelong fan, as I am.

iii) Delyn Grey – Put simply, she’s what you would get if Amy Winehouse and Nirvana made a baby. Essentially a rocker, but with lyrical aptitude and vocal depth that belies her young age. Her melodic phrasing is anything but run-of-the-mill rock, and her voice – at times hauntingly sultry, at other times pleading, bordering on howling (in a good way) – is a superbly powerful and beguiling instrument unto itself. She can work a crowd into a frenzy with her kick-ass rock quartet (“Listen to the Thunder”, “Battle”), or bring them to a trans-like silence, singing alone with just her acoustic guitar or piano (“Break Me Till I Bend”, “Ghost Town”). Oh, and she’s also my daughter…so there’s that.