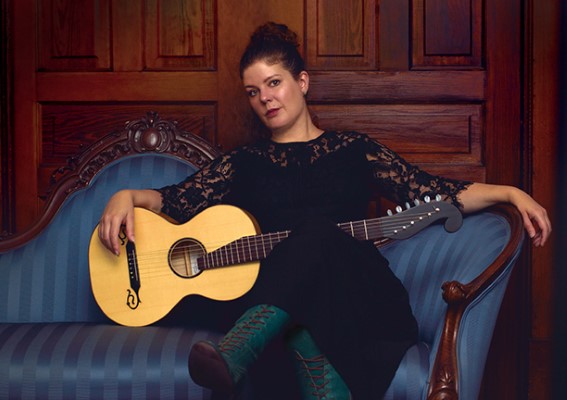 Award-winning Canadian classical guitarist Emma Rush has released her third solo album, Wake the Sigh. It brings to light a plethora of relatively unknown female-written guitar compositions from the 19th century, including works from Emilia Giuliani, Delores de Goñi, and Julie Fondard — a professor of guitar in Paris, France.

Putting Wake the Sigh together wasn’t as simple as listening to old recordings, taking inspiration from them and re-recording them… No, Emma spent a couple of years researching these classical composers and uncovering their masterful compositions, which went on to inspire the 43-minute work. 14 of the 17 tracks were never-before recorded, so the Hamilton-based musician is technically the first to ever release them.

During pre-production, the ambitious Canuck did a residency in Lübeck, Germany, where she was able to conduct a lot of her research. Pre-pandemic, she visited libraries all across Europe and eventually managed to piece together tons of information about seven different female composers – many of them also renowned performers — and their works written throughout the 19th century.

In regards to her eclectic approach to recording this album, Emma admitted:

“I always try to bring something new to the guitar world with my work, whether it’s playing music by unusual composers, or playing unusual music by the usual composers.”

On the overall inspiration behind Wake the Sigh, Emma added,

“I think it’s about time we played more music by women. There’s tons of it out there and it’s great.”

The 17-track album was produced by Kirk Starkey and recorded in Hamilton, ON. The entire record was performed by Emma Rush, on a replica of a 19th century Stauffer guitar — provided by Miodrag Žerdoner. The colourful and mesmerizing artwork and liner photography used in “Wake a Sigh” was shot and created entirely by Richard Talbot.

Check out the album below, and find out more about Emma Rush via our Five Questions With segment.

I’m a classical guitarist based in Hamilton, ON.  Most years I’m on tour about half the time – this year has definitely been a little different! When I’m home I’m always working on the next project.  I play a lot as a soloist, but I love working with other musicians too.  I perform regularly with Azuline Duo (with Sara Traficante, flute) and with James Bryan (Philosopher Kings/Prozzak).

Tell us a bit about your music.

I have a classical guitar background, but I love to explore music that is beyond the traditional classical guitar repertoire. A lot of the music I play has elements of folk music from around the world or gives a nod to fingerstyle guitar. I also made an album of solo guitar arrangements of tunes by Canadian songwriters – Joni Mitchell, Gordon Lightfoot. My latest album, Wake the Sigh, is definitely in the classical tradition but features pretty much unknown music written for the guitar by women in the 19th century. Most of it has never been recorded before. It was really cool for me to be able to bring these guitar gems to light. I recorded the album on a copy of a Stauffer guitar from the 1800s. My goal with every project to bring something new to the guitar world!

I’ve been really fortunate to be invited to perform a lot of online shows. That’s been really interesting… I feel like I can handle anything that might go wrong in a live show, but I’m not used to worrying about tech problems! Through the pandemic, I’ve been just as busy as I ever was. I’ve been recording videos, putting together an online class about female guitar composers, giving online masterclasses, adjudicating online guitar competitions, and I’m just completing a long-distance residency with the Sointula Art Shed in BC. I’ve also been working with Canadian composers to commission new music for the next record. And, of course, I’ve been playing a lot of guitar!

I would love for people to check out the new record and hear the sounds of the guitar from long ago.  Have a listen to the first track, Variations on a theme of Mercadante, by Emilia Giuliani.

I love this question!  For really interesting classical guitar music, check out Emmanuel Jacob Lacopo, based in Montreal.  Composers Amy Brandon and Chris Derkson are making pretty killer music. And I always go back to the Canadian classics – Joni Mitchell is a regular on the playlist.