Five Questions With Short For Arthur 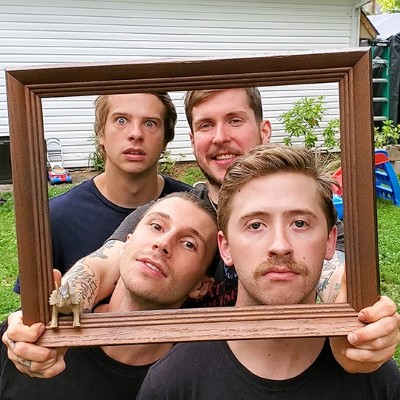 Moncton, NB-based psychedelic blues-rockers Short For Arthur are back with a new single, “Hanging Paintings”.

“This track is about how there’s more to life than meets the eye,” frontman Jordan Best says. “When we choose to take a deeper look at things, we can find beauty and meaning — or “art” — in anything.”

“We are all walking sculptures,” bassist Sean Bampton considers. “Everything around us is a painting, and every sound is music. Each of us are living our own story and, together, we’re living one giant collective one. Our mind is the paint brush and our life is the canvas.”

The music video for “Hanging Paintings” grabs a firm hold of the metaphor and runs with it just as artfully.

“We took the concept and implied it further by bringing famous paintings to life,” guitarist Dylan Bingham offers. “First we see the main character waking up to Salvador Dali’s melting alarm clock before, on his way to work, he’s stunned to see Grant Wood’s ‘American Gothic’ couple staring at him as he drives by.

“He then proceeds to go to a coffee shop and is served his espresso by none other than DaVinci’s ‘Mona Lisa’ herself!

“He rushes home and walks in, only to find his friends playing poker,” drummer Steven Dufour continues. “But they’ve been transformed into dogs as in Cassius Marcellus Coolidge’s ‘Dogs Playing Poker.’

Watch the video below, and find out more about Short For Arthur via our Five Questions With segment.

The 4 of us met in high school in the small town of Riverview, NB. We started off jamming in our mom’s basements and never really played the same thing twice. Sometimes it was improv, sometimes it was singing (or yelling haha). Sometimes we would add new parts to some riffs we had and would throw some vocal ideas in here and there. One day we decided to put together some songs and recorded a very different sounding “Punkish-Blues” style EP under our original band name (Godawful Tenants). As we continued to evolve and polish our material, songs, sound, and performance we changed our name to Short For Arthur in 2016 and began to play around different venues and Festivals in the Maritimes! When we aren’t busy recording, rehearsing, writing, or performing you can find us in a backyard bbq playing hacky sack and cracking dad jokes.

Each of us has very different personalities, eclectic musical tastes and we come from backgrounds which can most certainly be heard in our music. One of our favourite things is getting lost in an improv jam while rehearsing and it’s how we began as a band so we love to incorporate that aspect of our sound into our music and especially our live performances. We love to bring in strange ideas and craft them into “listening-friendly” tunes. We love tempo changes, rhythm changes, strange riffs, key changes, jams, and solos. We tend to lean towards strange but catchy and meaningful lyrics. Our songs sprout from either riffs and melodies written in one of our living rooms or from an improvisational jam that often sparks up during rehearsal. We naturally play, think and write outside of the box. But that is really just a result of us just playing what we think sounds good and having fun with creating music. The creation process is probably our favourite part of being musicians. We actually write a little bit “too much” because sometimes it can be distracting us from finishing up material in a timely manner. However, the upside of that is we have an abundance of music to choose from and just end up moving forward with whatever riffs and ideas bring us the most excitement. I’m sure many bands could relate to this, but opposite personalities can bring occasional disagreement in the creation process. But we have learned to see that as an advantage and bring the two sides together to create an entirely new result!

Well, we were actually able to play one show on September 26th in Moncton NB! It was a total breath of fresh air as you could imagine. But other than that most of our time has been spent recording in the studio, filming our new music video for ‘Hanging Paintings’ and writing new material. We have released 3 songs in 2020 and have another one to record hopefully before the end of the year! Ideally, we would love to get started on a full album next year and begin rehearsing with the intention of touring whenever travel allows for it.

That’s a tough one but we would say ‘Hanging Paintings’ because it demonstrates every aspect of our sound. It’s not too out of the box but still takes you through a rollercoaster of changes throughout the song.

Skeleton Club blew us away when we first saw them at Evolve in 2019. Plant & Animals, Walrus, The Guess Who, Les Moontunes, Nebullama. The list goes on. We are consistently blown away by all of the talents here on the east coast. One of the best parts about playing gigs is having the privilege to see amazing new acts live, upfront, and center!