Five Questions With The Mendozaz 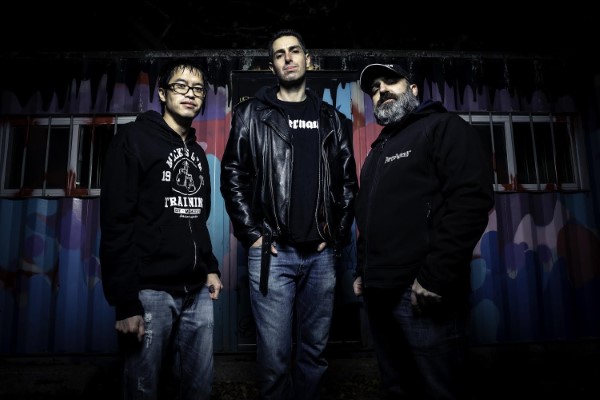 Toronto, ON-based melodic, sarcastic punk rockers, The Mendozaz have released a video for their single, “Murder” from their upcoming full-length, Up and At Them.

The single was penned by guitarist/vocalist Jonny Mendoza, who also writes for stage and screen. He says

“…Atmosphere was the number one thing for me driving this song. I wanted to combine the punk aesthetic with elements of horror and film noir and see what came of it…”

The video for “Murder” was filmed by Crusty Media (Michael Amaral) and edited by Julian Hoffman and Michael Amaral.

Check it out below, and find out more about the band via our Five Questions With segment.

I’m Jonny Mendoza. Vocalist/guitarist for The Mendozaz.
Tell us a bit about your music and writing style
We originally conceived the band as a Green Day knock-off project. If you listen to the first single from our first album “Last Call” the resemblance is unmistakable and completely intentional. But like most musicians, our musical taste is far-reaching and we wouldn’t have been fulfilled knocking off one band forever and ever so we started digging into our differing personal tastes for inspiration. Michael’s really into 60’s British Invasion, proto-punk, and hardcore. I’m a bit of a metal-head and have a real soft spot for 90’s Can-Con. As far as writing goes, usually, I show up with the skeleton for a song, Michael’s a real wizard for writing bass parts on the quick. Zozo, our drummer, can play just about anything. So we record different arrangements, listen back, and go with what sounds best.
Do you have any upcoming shows? For someone who has yet to see you live, how would you explain your live performance?
We had to shut down because of the pandemic. We haven’t been able to get together too often since the spring and probably won’t be back in full force until after the pandemic is over. But we’re sitting on some material so there won’t be any shortage of new music from us over the next few months. As far as our live show goes, we have a set-within-a-set called the “Mendozaz Blitz” where we blast through a handful of our shorter songs in rapid-succession. It really keeps the energy up. We like to have fun on stage and it rubs off on everyone at the show.
If you were asked to suggest only one of your songs for someone to hear, which would it be?
Our latest single “Murder”. It’s on all the streaming platforms and we made a video for it over the summer.
Canadian Beats is all about Canadian music, so who are your current favourite Canadian bands/ artists?

In the Toronto punk scene alone there’s Wasting Time, Hangtime, Sixteen Scandals, Keelie, The Bare Minimum, The Danger Bees, Tragic Hearts, The Sham, The World Famous Tallboys, ASOP, Hotel Murder, Prior Convictions, remainameless… the list goes on and on. There’s also a ton of really great Toronto-based metal bands. I really dig Phantom, Mokomokai, Metalian (okay – they’re from Montreal), NLP, Skull Fist, Ammo, Villain, Cauldron, Blood Ceremony, Jahgernaut, Kosmograd… again, I could go on forever. Toronto has always had a really vibrant music scene, even with so many venues closing. The worst part of the pandemic for me has been not being able to go out and check out shows. I look forward to better times in 2021.