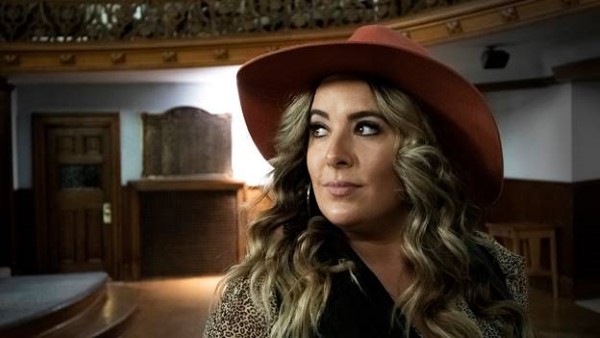 Canadian singer-songwriter K BESD has turned rock, pop, and hip-hop genres on their heads as she pays homage to Goddo’s 1978 iconic hit in “TUFF TIMES”.

“I’ve known Greg since I was a kid, and ‘Tough Times’ has always been one of my favourite songs of Goddo’s,” K BESD (Kelly Abesdris) recalls. “My producer and I were sitting at the studio brainstorming ideas and played the beginnings of Post Malone’s ‘Take What You Want’ and Goddo’s ‘Tough Times’ — they both have a great guitar riff in the intro, and I love the idea of blending genres to create what Post Malone calls ‘shmusic.’ We realized it was time for me to make a call to Greg and luckily he said yes to allowing me to rework his song.

“A lot of magic happened right from the beginning,” she recalls. “Trey started working on the beat and soon enough, the lyrics simply flowed out of me. I knew I wanted the original hook, and to incorporate some of the other lyrics — but also make them my own.”

“I felt the way he wrote and delivered his lyrics would fit perfectly so I reached out to him on Instagram and, within 24 hours, he had written and sent over his idea.

The pieces had come together but, before releasing “TUFF TIMES” to the world, K BESD was keen to glean Godovitz’s thoughts on the reimagined track.

“Once we had it somewhat put together, I sent it to Greg on my way home from the studio one night. He called shortly after and said, ‘ARE YOU KIDDING ME?!’

“I held my breath for a moment,” she reveals. “I was wondering if this was a good or bad reaction? It turns out it was good, and he immediately sent it over to his pals Paul Dean (Loverboy) and Eddie Kramer, both of whom shared his enthusiasm.”

Check out “TUFF TIMES” below, and find out more about K BESD via our Five Questions With segment.

Hi there! My name is Kelly Abesdris, AKA “K BESD”.  I was born in Toronto, Ontario to Kimberly and Gilbert Abesdris at Wellesley Hospital, six weeks ahead of my due date and ready to sing!  Ok, ok, I’m kidding.  All jokes aside, I come from a musically inclined family on both my maternal and paternal sides and grew up listening to familiar classics such as Gordon Lightfoot, CSNY, The Beatles, The Animals, introduced to me by my dad. I was raised in Brandon, Manitoba where my mother’s from, and attended French Immersion at Ecole New Era School. At a young age, she enrolled me in piano, violin, orchestra, theory, and choir lessons at the esteemed Eckhart Grammate School of Music where I participated in a variety of competitions and completed rudimentary examinations, often taking first place and passing with honours.  As a teen, I found music to be a great solace while navigating tumultuous family dynamics, and have once again sought its comfort while facing some challenging situations and searching for a sense of community. Music has and always will be an integral part of my life, and I’m ready to bare it all through my deepest form of self-expression. I continued my journey west just over 10 years ago and now reside in beautiful Calgary, Alberta.

My musical taste is quite diverse – I’ll listen to an acoustic coffee house playlist in the morning, EDM while exercising, Linkin Park and Marilyn Manson if I need to blow off some steam, Post Malone, GASHI, and Banks while I’m driving around for work and then some smooth jazz or Motown while relaxing into the evening.  I have such an appreciation for so many genres and styles and I love the idea of blending my favourite elements of each.  I feel this is reflected in the music I create and I do hope this creates appeal for a cross-genre audience.  My writing style varies, however, I generally tend to listen to a beat and come up with a hook first.  I then jot down a list of ideas for verses and eventually reorganize it all into place.  For whatever reason, I find the lyrics come easiest to me while I’m driving, so I’m often having to pull over to make notes or record a voice note.

I’ve honestly had an ever-expanding to-do list since I officially started building my music career about a year ago.  I’ve been keeping busy working on my website and social media, creating content for posts and my own lyric and promotional videos.  I learned how to use iMovie and actually have found it really fun!  I’ve also taken the time to reach out to fellow artists from all over the world on social media which has lead to a few collaborations and features.  By the time we’re back to regular life I should have a really strong repertoire put together and I can’t wait to get out there and share what I’ve been working on!

While I of course love them all for different reasons and what they each mean to me, I would definitely suggest TUFF TIMES.  The story behind how it all came together from Greg Godovitz of Goddo allowing my producer and I to rework 1978’s Tough Times, and then having his pal Eddie Kramer come on as co-producer was absolutely mind-blowing and gave the track an extra special touch.

Us Canadians are killing it in the music scene these days!  I’m a big fan of fellow Calgarian Tate McRae, I think she’s so talented and hear she’s extremely hardworking which I very much respect. Of course, so much great music comes out of Toronto and I’m a fan of many of its artists such as The Weeknd, Drake, Plaza, Kavale, Yarah.  There’s also quite a fantastic music scene in Calgary. My good friend Angie C who also works with my producer, Trey Mills at Unbound by Sound, is also extremely talented.  Her upcoming album was created with brain-wave controlled TONTO, Calgary’s historic analogue synthesizer at the National Music Centre.  She has some great songs out right now with DJ Titus1 who I also have an upcoming single with.  Check out: I Wanna Know, The Other Side and Standing on My Own from them for some great workout motivation.  Another Calgary based artist I really enjoy and respect is Kristina Nichol.  I think she’s going to go far and my fave tune of hers is I Get to Love You, although Space and Circles are also really great.  Lastly, FRVRFRIDAY from Edmonton is really making a name for himself and I’ve had his song “100 Rounds” on repeat.