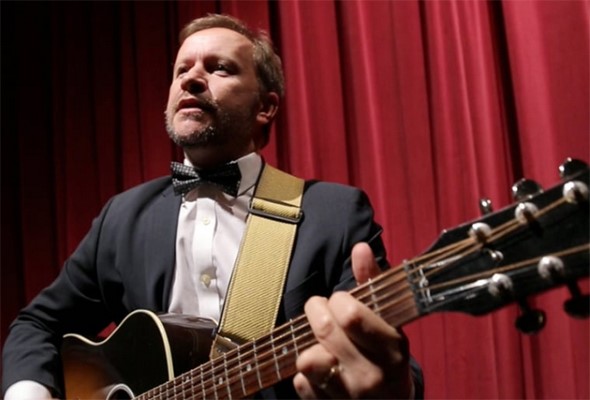 Unusual Friendships is based on the children’s story Unusual Friendships: A Little Black Cat and a Little White Rat, written by the award-winning Métis author Beatrice Mosionier — who is also Culleton’s aunt; the 71-year-old novelist wrote the rhyme-heavy book as symbolism for difficulties Métis persons experience.

With a collection of 14 original songs, Culleton effectively turned pen; to paper, back to pen; to paper; to eardrums. The 36 minute-spanning record features a mixture of traditional and contemporary roots song while succinctly retelling the symbolic tale of acceptance and equality relayed through a peculiar friendship which blossoms unexpectedly between a black cat and a white rat. Though rats and cats are thought to be enemies, the dynamic duo stick together throughout Unusual Friendships to fight and earn the respect of others.

Touched by the story, Culleton decided to take his own shot at Unusual Friendships — but from a sonic approach. Though he breathed new life into the classic Canadian tale by recording an entire concept album based around it alone, just that didn’t seem to be enough for the contemporary multimedia artist.

As his first-ever children’s album, Culleton made it his mission to ensure his listeners — whether kids or adults — could be fully-immersed into the musical adaptation. How did he do it, some might ask? Well, he partnered up with an augmented reality (AR) company by the name of Artivive to help turn the exciting listening experience into a wondrous animated experience.

For the full multimedia experience, all listeners have to do is download the Artitive app on their smartphones or tablets and scan Culleton’s latest album cover and bring it to life with the vivid and spectacular, music-backed animations illustrated by James and his 13-year-old daughter Mae Culleton.

The album features Al Simmons on banjo and harmonica, as well as feature vocal spots from Franco-Manitoban musician Andrina Turenne. On top of that, there’s an adorable chorus of “cats” contributed by some of the children in the St. Boniface neighbourhood in Winnipeg. Unusual Friendships was recorded at Scott Nolan’s Song Shop with Jamie Sitar in Manitoba.

Learn how James brought Unusual Friendships to ILife in the video below, and find out more about James via our Five Questions With segment.

I’m James Culleton, an artist/musician/designer living in Winnipeg. I’m 1/2 French and 1/2 English and have two kids, a dog, and two turtles. I’m married to a writer/triathalete/teacher and live in St.Boniface, the French part of Winnipeg.

My music tells stories. There’s a hint of novelty in them and I like it when music makes you laugh. Sometimes I’m telling my own stories, other times I’m telling other people’s stories to music, or reinterpreting old poetry into song. I think music, like art, can make things more memorable. Forgotten moments, bringing things back from the past. Or fantastic moments, music can describe things that happened where there is no documentation.

I think I write down the memories and significant moments, sometimes I draw those too.

I’d say the music I make is for everybody. Unusual Friendships, though a kid’s story has important ideas in it that everyone can get. The music is tasteful and will be a thing you can put on for both kids and adults and repeat. My kid’s childhood was a mixture of listening to albums like this and albums we all enjoyed. When it comes to making albums I like to get together a good team of talent and Winnipeg has some of the world’s best. I workshop the songs with everyone previous to going into the studio, I find that part makes it very collaborative and explorative.

I’ve done a few pop up online shows, but I’ve been focusing on videos and illustrations for Unusual Friendships as well as the AR(augmented reality) features I’ve connected to the record. I feel like the album will be an idea/thing that’s going to keep growing using that technology. I can connect lyric videos, animations and music to any part of the art from the album and basically bring it all to life. It is also a lead in to a fully illustrated book fo the project which I imagine could also lead to vinyl. Lots to do! I’ve connected on video to the cover so far that I built with my 13 year old daughter Mae. We’ve started working on a few more that I hope to release in the new year.

In the meantime, though I just finished up a bunch of playground murals for my kid’s school and recently completed installing a giant light display at the Assiniboine Park Zoo for release in 2021…a 15’ 3D moose, and a huge 8 stage animation of a galloping horse made of rope light to name a couple of things. These all complement the running polar bear and full-size bison I did last year. I’m often involved with festivals and this light festival has been a great one for families.

On this record? Hmm, that’s a tough one. I think the title track Little White Paws has a sprinkle of everything that’s great about this album and gives you a summary of what you’re about to get into. It showcases my voice with Andrina Turenne, who I’ve been singing with for a long time now. It also shows what a playful and interesting writer Beatrice Mosionier is. The song has traditional elements and lots of good fiddle. And of course, it wins for cuteness with the kid choir singing the meow meows in the background!

Well, when it comes to family fun and hilarious music Al Simmons is my favourite and I had the honour of having him on this recording! There’s a really hilarious moment on the song ’The Dog Trot’ where I asked Al Simmons and Joanna Miller(from Knob & Tube and Scott Nolan) to play a cat and a dog chasing each other around the studio that shows what great talents the two of them are. I love the work of Ron Sexsmith and Rufus Wainwright Daniel Romano is always on the playlist too. I can’t wait for the next Lisa Leblanc album to come out. Bahamas, Jean Leloup. William Prince is fantastic. BEGONIA!!! Oh man, just the local music scene here in Winnipeg is amazing in richness. Andrina Turenne’s last single is the best.