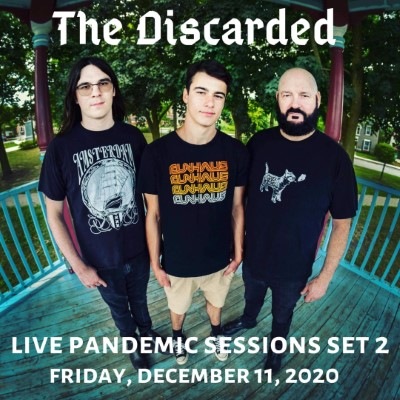 In these COVID times, bands are unable to play live shows, but that’s not stopping The Discarded from playing for the fans. The band decided to bring the show to you online in the comfort of your home.

Not really satisfied with the limited sound and shot quality off a cell phone, The Discarded entered into Sessions on the River in Fort Erie and laid down three sets covering their three albums, one EP, and select new, never-released material. From these sets, they will be releasing a 15-song digital release only live album of selected songs from these sets.

Set one released Friday, November 13, 2020, and saw features songs from their first and second album: the 2017 self-titled The Discarded and their 2018 second album, Manifesto.

Set 2 is being unveiled today, December 11, 2020, via Canadian Beats, and will see featured songs from their 2019 releases, the EP Not From This Town, and their third album, Sound Check and Fury.

The band shares on this release,

“Twenty-nineteen saw two tours, two releases and twenty-four live shows.  These songs where the backbone of those shows last year and a good number of songs we’ve been playing live for the past two years.  It was fun to get a chance to rip them live again for the cameras.”

Check out Set 2 of The Pandemic Sessions below, and be sure to stay up to date with the band via their socials.