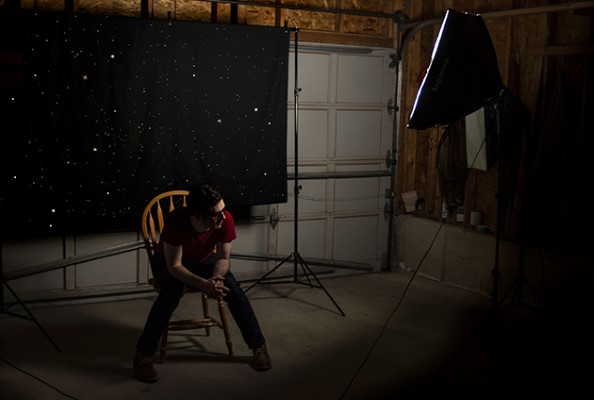 Toronto, ON-based singer-songwriter, and multi-instrumentalist Jay Gordon Wright has unveiled his newest single, “Take Your Time”, along with his sophomore EP, Fall For Anyone.

But, let’s back up a moment…

“The EP represents a journey of sorts,” Wright fittingly offers, noting it’s from the idyllic to the dystopian. “It begins with the purest of love and intentions, handicapped by self-doubt, impatience, and frustration, and ultimately it ends in disillusionment and fury.

“This song is more carefree in a way that others on the EP aren’t; it’s a bit of a release,” he continues. “It’s meant to be reassuring, kind of like the inverse of the impatience I can feel throughout the artistic process.

“I think the message is that love triumphs in the end, whatever trials you might face along the way. Maybe it’s passive, as in ‘sit back, relax, it all works out,’ or maybe it’s active, as in ‘this is your time, take it!’

“Actually… When I think about it like that, it calls attention to the urgency of it — ‘hurry up and relax!’

“My only regret is that there isn’t more cowbell… My fever continues to spike.”

Check out “Take Your Time” below and find out more about Jay Gordon Wright via our Five Questions With segment.

I’d love to! My name is Jay Gordon Wright, and I’m seriously glad to be here. I grew up on violin and switched to guitar and bass when I was in my teens. Music has just always been in my head and sometimes it feels like the best thing to do is just to let it out — and then apologize later.

I guess I’d say that my music is more traditional in nature — focused on melody but enriched by textures. I grew up listening to a lot of music from the 60s and 70s, and those influences certainly make themselves known. The music can change a fair bit from song to song, depending on a lot of factors… which instrument I wrote it on, where the melody is in my range, how I’m feeling when I record.

As far as writing style, musically I generally record ideas as I get them throughout the day. When I sit down to write, I’ve got them to draw on, so it can grow from that. A lot of the songs come as flashes of inspiration, that I have to sort of chip away at. Once I’ve gotten a rough idea of chords and melody, that’s when I dig in and try to find the beat and emphasis. I’m big on texture writing, I think the same song can make you feel differently whether it’s solo piano or six acoustics, even if the central performance is the same. The last song on this EP, Gaslight, actually started as a much more laid-back song. It was just waiting for the right kind of day for me to pick it up and shake it until it had the right energy. I love revisiting what I’ve written and tinkering.

Lyrically, I usually know early on what the chorus will be, or have a rough idea. What takes me longer is sitting with the chorus I’ve written and asked it what it wants as a roommate. It’s got to share the space with the verses, you know? I usually end up actually learning a lot about myself when I’m writing the lyrics, cause I have to kind of dig into what motivated the chorus. Sometimes a fan will tell me that a song has so much energy and makes them smile, and for me, it’s actually melancholy. It’s not that I haven’t gotten my message across, it’s that the same stimulus can mean something completely different to another person. When it’s rainy and dark outside, one person might be upset and throw the day’s plans away, and another might be really excited to curl up with a mug of tea and read a book. Personally, I think I haven’t done my job as a songwriter if there’s only one meaning — I dwell in the ambiguity and I love it.

I think it’s unleashed a different kind of creativity. Live performance is important, but it’s such a rigid format and lends itself really well to predictable cycles. Every artist I know is asking themselves how to pivot, so to speak. I think part of the reason why that pivot might be exciting is because everyone’s creativity is unique. I’ve fallen back into writing more and gone back to the drawing board a bit as far as how to express it. I’ve got a concept for the new year that I think is going to be a lot of fun, and I think it’ll be a neat experience for my fans, too. For me, it’s going to stretch what I’m capable of. Sometimes when you’re gigging a lot, you can get into a treadmill where you’re not able to take on something that’s ambitious. So I think that’s the creativity I’m falling back on, an overall vision.

It’s tough to pick just one, but I would have to say Gaslight, from the Fall For Anyone EP. It’s got a really different feel from this one and I think it’ll show something different.

Blue Rodeo was a big part of my childhood’s soundtrack, and I still love them to this day. Joni Mitchell and Tanya Tagaq are also favourites.