Five Questions With The Cola Heads 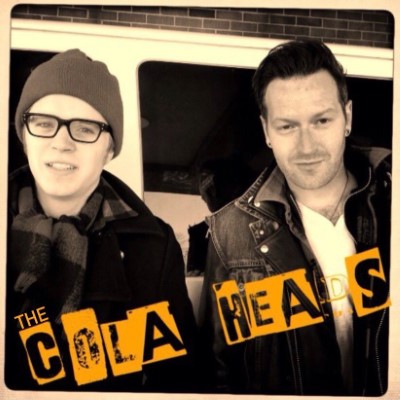 Check out the EP below, and find out more about The Cola Heads via our Five Questions With segment.

Well, I was musically raised by three older brothers whom were all into punk, rock n roll, and metal music.  So naturally, they handed off all of their knowledge, records, tapes, and just overall love for different non-mainstream music to me. Some of that music includes bands like  Dead Kennedys, Misfits, Screeching Weasel, etc… I think the first song my brother Nick (Biblical, The Illuminati, Drunkula, Mount Cyanide) ever taught me on guitar was Hybrid Moments by The Misfits. I loved the 50’s style of Misfits songs from the get-go because I grew up listening to ’40s and 50’s music from my parents as well.  Buddy Holly, Elvis Presley, The Beach Boys are just to name a few.  So as far as our music goes, there are a lot of clear connections between our songs and those bands and eras that paved the way for noisemakers and songwriters like us.

No upcoming shows as of yet for obvious reasons.  But we are working on a new full-length record to follow DIE YOUNG.  So in the new year, unless venues are open by then, we will jump on the live stream train and do some performances out of our rehearsal space on the worldwide interweb. Our live show is definitely high energy.  We start off fast, strong and loud, and end fast, strong, and loud.  With our later stuff, we understand the importance of peaks and valleys when it comes to a live performance and even on an album, so we do have moments of rest and instrumental moments before we kick back in full force to finish a live show strong.

As far as the 7″ goes I’d recommend the single DIE YOUNG.  You will definitely be able to hear an undertone of a 50’s style of songwriting perhaps sounding a bit like Buddy Holly or The Beach Boys as mentioned before. My personal favourite song on the 7″ is SEPARATION because I’m talking a lot about how segregated and competitive the Toronto punk and music scene can be.  Not all the time, but in some cases in the past I haven’t felt that welcome, at times that is.  It can be very competitive and ego-based. Like a popularity contest, if you will. So SEPARATION is just about that.