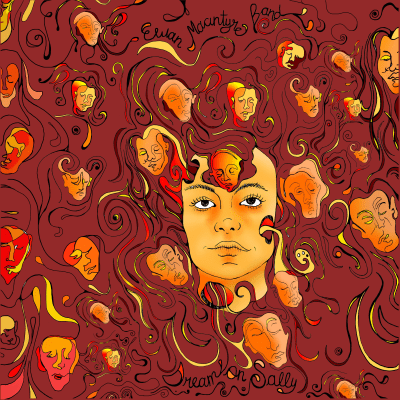 Canadian soul/ Americana/ Celtic artist, Ewan Macintyre has unveiled his latest single, “Same Story (Cigarette Butts)”. The single is inspired by observations of addiction and homelessness as well as a relationship he developed with a colleague.

Ewan’s writing for his upcoming album, Dream On Sally, is heavily inspired by his band, featuring lush string arrangements that weave in and around his cleverly crafted vocal style.

For his newest endeavour, Ewan set about putting together a core group of musicians to build the sound he wanted. The group consists of Peter Menzies (pronounced Mingus) and Karine Bouchard. Together, they toured the 2018 album Road Junkie and in 2019, toured around Europe and Canada. During that time, Ewan wrote up 10 new tracks, where 8 were recorded in three locations while en route.

“The new album, Dream on Sally, is a celebration of our relationship as a trio and the amalgamation of 5 years of hard work,” he says.

Check out “Same Story (Cigarette Butts)” below, and find out more about Ewan via our Five Questions With segment.

Hello, my name is Ewan Macintyre, a musician, writer, 2nd generation puppeteer, and bits and bobs builder (renos to sculpture). I hail from Scotland and for the last 6-7 years, I have been mostly in Quebec and other parts of Canada, where I live and work with my beautiful cellist/ horticulturist girlfriend, Karine Bouchard.

I feel very fortunate to have built a strong community of very talented musicians around me. I take pleasure in writing material that both challenges them and myself. My inspiration presents itself in different ways and manifests in melodies, chords, or lyrics to begin with. From there it can either be a really quick process, though in some cases I can sit on something for years before it comes to form.

My latest album “Dream on Sally” is heavily inspired by the core trio of the group I work with (cellist Karine Bouchard and Fiddle player Peter Menzies). Throughout the album, I explore string arrangements that dance around my vocals.

I try to practice free writing regularly, allowing my subconscious to splash out on paper without control. From there I re-write and pick out meanings and elaborate on certain topics that I find meaningful. Generally, I try not to be too precious about the material and once I’ve built up a bunch of content, it forms an album, which for me marks a moment in time with colleagues or as a signifier of where my writing is at a certain point in time. I take writing seriously and have a team around me that I work with to reflect my ideas. For the new album we met up prior to the tour for 4 rehearsals and then we broke in 10 new tunes over a two-month tour, that got whittled down to the 8 tracks that appear on the record.

My roots of writing are a mix of songwriting for a Celtic/ bluegrass 7 piece string band, writing psychedelic funk music, and making music for soundtracks.

I’ve been writing a bit and pulling together a 7 piece, Quebec based band which I hope to do some recordings within January. I made a Vampire puppet for Halloween that we filmed a song for… I played a few shows and tried to practice and stay positive as much as possible whilst coming in and out of waves of depression.

The new single “Same Story” out on Dec 2nd is quite a belter. I’m proud of everything on the upcoming release “Dream on Sally” out Jan 18 on t’interweb, particularly “Bright Lights”, “Dream on Sally” and “Breaks and Waves”.

Older stuff: “Wine and Whisky” and “Champagne in Heaven” are both favourites. “Lucky Ones” and “Red Ribbon” are special and “Sideways” is the soundtrack of my cross Canadian adventures.

I’m quite unknowledgeable on current music and tend to have happened across music from friends groups. I long to be allowed to actually play and listen to live music.

Some special groups that come to mind are Le Winston band, La Carotte Polaire, Amanda Gibeau, Karine Bouchard, Ben Plotnick, Sheesham and Lotus, and Son, Tyler Lieb, Jeremy Gignoux, Pierre Shryer, and an all-time favourite and reason why I moved to Canada, The Silverhearts, and Brian Sanderson -duh! Also, Thierry Cloutte from E.T.E. and Saligaud is a super talented writer and player.