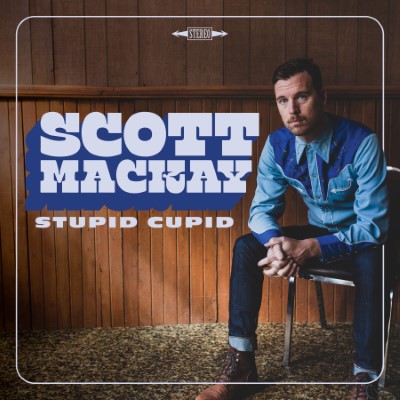 Charlottetown, PEI-based classic country singer-songwriter, Scott MacKay is about to release his new album on January 8, 2021. In advance of the release, he is unveiling the title track, “Stupid Cupid”.

It’s not hard to tell that Scott has an affinity for country music of the 1950s and ’60s, but he has also a sharp wit that shines through on the upcoming album, which features 10 original sounds, offering a fresh, modern take on classic country.

“I really became smitten with songwriters such as Shel Silverstein, Hank Williams, Bobby Bare, Roger Miller and others,” he says. “It made me focus my attention on improving my songwriting, and I tried to learn as much about it as I could. I took a lyric writing class, a storytelling class, and a creative writing class. I even took part in a songwriting workshop in Nashville where I got to meet and learn from some of the greatest songwriters in the world.”

The results of that hard work speak for themselves on Stupid Cupid. From the title track’s protagonist having his plan to win his dream girl go terribly wrong, to the tale of someone receiving a “Brand New Heart” from a man killed by his lover, to the surprisingly philosophical “God Walks Into A Bar,” MacKay effortlessly breathes new life into longstanding country music themes. However, it’s all designed to put a smile on your face, as well as a tear in your beer.

He has a Kickstarter campaign running in support of the upcoming album, check that out HERE.

Watch the video below, and stay up to date with Scott via his socials.