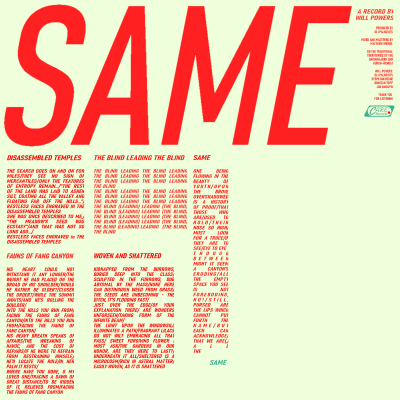 The Double EP (which consists of 2 sides Same and Burning Hands) are the latest releases from multi-instrumentalist Oli Palkovits AKA Will Powers.  The first half (Same) is a very psychedelic album. Woven throughout this album are feelings of euphoria like I was having a dreary shitty day then lo and behold I’m taken to an acid-filled paradise traveling back in time to 1967 during the summer of love. The tracks are very cohesive; they blend into one another smoothly like it’s just one full song you don’t have any empty space at the end of each track then on to the next.

The second half (Burning hands)  carries the same energy but also is the comedown of any amount of energy that one person has expelled in their life.  The interpretation I get from this album is somebody trying to find themselves. They are alone trying to figure out their lives.

The stand out tracks for me are “Fauns of  Fang Canyon” and “Seeming Lens”, an upbeat and somber driving song. One to build your confidence and the other about reflecting on your life,  the choices you’ve made that have led you to a certain point. Is it worth it? Did I make an effort to better it in some significant way, so I have lived a fulfilling life? Overall this Double EP was a trip I would gladly take over and over. Just as a fun listen as well as re-evaluating my worth in this world.