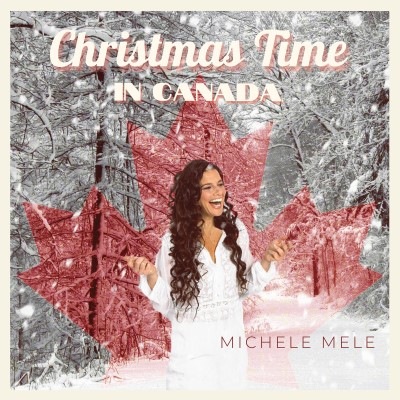 Indeed, one will find it difficult to resist the minimal setting in which Mele intimately intones the Yuletide classics — “The Christmas Song,” “Let It Snow,” “Merry Little Christmas” and “Winter Wonderland” — as they go way beyond familiarity, and not only because of a personal twist that Michele added to the perennials, making them her own, but also because of the strong emotions underlying, and contrasting, the singer’s deceptively calm delivery.

This approach might be the reason why it took the Canadian so long to mold the album, whose history runs back to 2012 when Mele had an idea of making a Xmas album in a bossa nova style and, both surprisingly and understandably, could not wait until winter to lay down the record’s first tune.

“We recorded ‘Winter Wonderland’ on a hot summer day,” says Mele. “And I remember sitting on the deck at our cottage on Lake Wah Wash Kesh that weekend, listening to the first mix and just loved it! I was so happy that [producer] Greg [Kavanagh] found a way to include that beautiful harp glissando!”

Still, Cozy Christmas wasn’t destined to join the line of her full-length offerings – Mele’s issued six of these to the date – and “Winter Wonderland” is returning now alongside other seasonal cuts on the EP which will complement Michele’s previous, sultry albums such as Cha Cha and Naked On The Rocks — the latter a companion piece to the artist’s one-woman show of the same title.

Check out “Christmas Time In Canada” below and find out more about Michele via our holiday-themed Five Questions With segment.

Hello Canadian Beats readers, I’m Michele Mele, vocalist, composer, music educator, and mother of 4 adult children. I’ve been writing music for over 20 years and have released 6 albums of original material as well as 2 original shows, Naked On The Rocks and Universe In A Kiss, which have been well received by Toronto audiences. I’ve performed all around the world and have had the pleasure of working with some of Canada’s finest musicians. I’ve created a Youtube cooking/music show called, Michele In The Kitchen also Mother and Daughter In The Kitchen on Instagram.  I’ve created and curated a local concert series called Concerts At Michele’s as well as a Youth Festival called Sunburst Festival to showcase Canadian musicians under the age of 30.   I love Canada.

What made you release a Christmas track?

Well, it started a few years ago with a Bossa Nova interpretation of 4 favorite tunes, and then this year I wrote a Canadian upbeat, lively, Christmas song that represents our hearty and happy spirit. It’s called Christmas Time In Canada.

What can you tell us about the making of the video for “I’ll Be Home For Christmas”?

There isn’t actually a video for the tune because I just wrote it last month and we didn’t want to make a Christmas video without snow!!!

What is your all-time favourite Christmas song?

I have a number of Holiday favorites: Winter Wonderland, Ding Dong Merrily On High, Sleigh Ride, as well as Classical pieces.

What is one holiday tradition that you enjoy?

I love this time of year! Our favorite part is being together with all of the family. This year it will have to be via zoom but we can still feel the love.