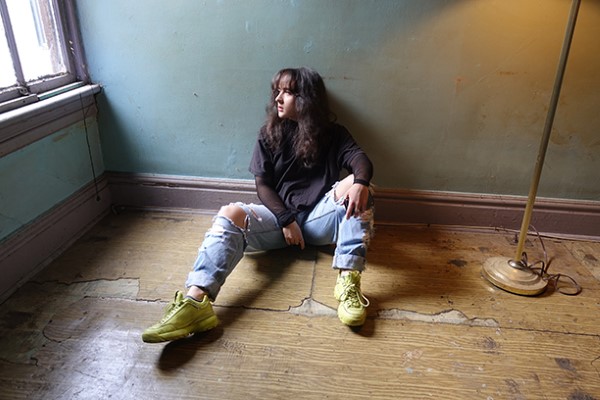 Toronto, ON-based artist Delyn Grey has unveiled her new single, “Listen To The Thunder” from her forthcoming album, Disappointment Girl.

The single will surely multiply the number of her fans because it’s a testament to Grey’s maturity as a musician — a writer and a performer.

Surprisingly, this track was born not in today’s gloomy atmosphere but a few years ago, when Delyn hit emotional rock bottom and began to fight back. This is why “Listen To The Thunder” feels so disturbing and its video alternates between black-and-white — whose mix is, of course, grey — and sanguine red, which should hint at hope.

And while anger and frustration seep out of this riff-laden, heavy blues — a totally unexpected sonic turn for the Torontonian — the circumstances of its genesis were auspicious to the youngster’s emotional healing and her artistic success.

“Some magical things happened in the studio when I was 17, and ’Listen To The Thunder’ was one of them,” says Delyn. “I cracked into a bunch of insecurities, fears and pressures that were keeping me from writing what I needed to, and when I did, it was one of the first songs to come out.”

It sounds easy, like happenstance, yet Grey has a method to her approach.

“That same day I had been writing another song, which is soon to come, and I wrote ’Listen To The Thunder’ while I was eating lunch,” she explains. “The first voice memo I have of it is 20 minutes long, and it was a really cool 20 minutes: it’s me slamming my kitchen counter and making weird sounds, until the song took shape.”

But it was a long way from being released.

In the meantime, Delyn molded a sound of her own, letting her skills as the trained piano player, self-taught guitarist and vocalist blend with her varied musical influences and produce a quite eclectic but unmistakably personal style. That’s what caught the ear of another Canadian, Bif Naked, who signed Grey to her artist and talent management division, Her Royal Majesty’s.

And this is the time the Toronto denizen came of age and finally presented her old piece to the public.

But Delyn is still puzzled by “Listen To The Thunder”:

“I’m still trying to figure out why I wrote this song. One thing’s for sure, performing it makes me feel badass, and maybe I needed to write it for an ego boost! I don’t want to speak too much about that because I hope for people to make their own connections, but it’s a song I’ve been looking for.”

Check out “Listen To The Thunder” below, and find out more about Delyn Grey via our Five Questions With segment.

Hey, I’m Delyn (DEL-IN), and here are some things you should know about me:

I don’t know why, but questions like this always make me uncomfortable. I have a really tough time describing my music because I don’t want to sound like every other artist who’s like: “I can’t gentrify it. It’s me. My sound is me, my heart, my soul.” I hear people say that and it makes me want to vomit. It’s so frustrating because that’s how I feel about my music but I can’t communicate it in a way that doesn’t make my toes curl. Life is a mess of events, beautiful and horrific, that shape us, make us feel things. Just so happens that I communicate that via music, the same way a painter would through their art or someone screaming out of frustration. My songs are me screaming to be heard, crying out for help, basking in happiness and glory, processing grief, empathizing with other humans…I write because I have to. It’s past the point of needing to at this point. In an older interview,

Jack White described himself almost as being a vehicle for songs that are already written, just waiting to be heard. I can totally relate to that. I can’t sit in a room for 5 hours with other people and write as many songs as possible because it just doesn’t feel right.

Every song I’ve written has come out when I start listening to the things going on around me. When the control freak relinquishes control, magical things happen.

Oh yeah, also, I’d say the alternative-rock world is kind of where things are sitting at the moment.

It’s been really hard. The first couple of months of playing around with live streams was cool but it just isn’t the same. Don’t get me wrong, technology is freaking amazing and it’s incredible that artists can still connect with their audiences. I just miss the energy. There’s nothing like it.

My dad built a wicked studio in our garage and we’ve been hiding out in there working on new tracks. I’m always writing. I have notebooks in every room in the house and instruments all over and that keeps me in a creative mindset. I’ve also been working on my social media content lately. New things coming for the ol’ YouTube channel and social media platforms.

This year has been a bit of a write off in terms of desired career growth. We were planning to tour and play and play and play. But honestly, it’s been nice to take a step back and connect with the music again. It’s so easy to lose track of what you love when you’re thrown into this numbers and popularity game. So long as I can find sustainable strategies that contribute to progressive growth to support the music I’m releasing, I’m happy. I really don’t want much more than what my songs are looking for. I’m doing what I can to get them out there, connecting with the world, but my goals aren’t based around numbers. They can’t be because it’ll break my relationship with music, and almost has a couple of times.

I’m getting creative by tapping into my business schooling and work experience to apply things to music that I already do. Social media and status chasing are SOUL and CREATIVITY SUCKING.

I can’t have music become a source of anxiety and depression..kind of defeats the purpose.

Side note, if you haven’t already, watch the Social Dilemma on Netflix. Find ways to get creative without tying numbers and status to it.

Oh man, you’re asking me to showcase my favorite child! Ha! I’ll start by telling you something you’ve probably heard a lot. Each song I write has a special place in my soul because they’ve gotten me through times where my emotions were so overwhelming, the only thing that could express them was music. Theoretically, if I could have a conversation with said person and ask them a bit about what it is they could be looking for in a song, I’d share one accordingly. My answer will change depending on where I’m at with my emotions.

Enough of that though, let’s get to my answer. Unfortunately, the songs I would suggest have yet to be released. Don’t get me wrong, you should still check out Listen to the Thunder and Battle, but wrote a song called Ghost Town earlier into the COVID lockdown (there’s an acoustic version on Spotify), and man, the studio version hits hard. I wanted to write something that could bring us all together without being rainbows and butterflies or incredibly depressing. U2’s ‘Sunday Bloody Sunday’ and NIN ‘Everyday is Exactly the Same’ really shaped the vision for it. It’ll be out next year and I hope you love it.

If I could choose a second song to suggest to someone it would be another unreleased track called ‘Break me ‘til I Bend’. The title kinda says it all. It’s the most vulnerable I’ve been with my writing (both lyrically and sonically) and I’m relieved to know that it will be out in the world soon.

Also, my playlists are never complete without some Bif Naked, Alannis, and Emily Haines. That is some seriously badass female energy. They make me feel like I can do anything.