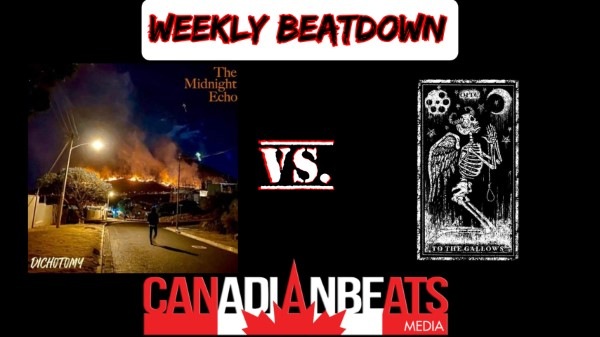 Good music Monday everybody, I bet you’re all feeling great and ready to go!! If that’s not the case well I’ve still got some great music to make your day better. This is the Weekly Beat Down, where we will be facing two amazing songs against one another. You the fans will vote for your favourite song, with the one counting the most votes moving on. There are also some other recommended articles from the website that will be featured on “Zach’s Picks of the Week”. However you’re going to have to watch the episode down below to find those, so let’s check it out!

The first artist that will be joining us are our reigning champs who have already secured three victories. Toronto alt-rock band The Midnight Echo returns with the video for their latest single “Carbon Copy”. The fantastic single comes off of their latest EP Dichotomy, which you can stream now. These guys are already halfway to being Hall of Famers. It’s up to you fans at home to decide if they will move on, and don’t forget to watch the video right here.

Our second artist and song to join the Beat Down, also hails from Toronto. Rock & Rollers One in the Chamber have just released the video for their latest single called “To The Gallows”. This new song is their second single to be released in 2020 after their last single “Blow”. The new video for “To The Gallows” was filmed, directed, and edited by the talented “Diego Pérez”. It’s up to you the fans at home to get your votes in, also check out the amazing video right here.

Now you the fans need to decide on your choice this week, they’re both amazing. When voting this week be sure to hit the “Anonymous Vote” button after you’ve selected your song. Good Luck contestants!

This poll is no longer accepting votes

Well, I hope you all enjoyed yourself this week and are still having an amazing week! I will see you all again very soon, like next Monday for sure. Spread that positivity people and as always, PEACE, LOVE, AND GOOD MUSIC TO YOU ALL! Coop’z signing off!!