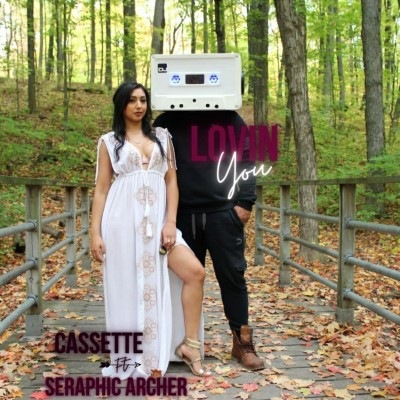 Canadian pop artist, Seraphic Archer has teamed up with electronic artist Cassette for a brand new single, “Lovin You”. The song fuses pop and EDM elements together to establish heart break ear candy.

Check out the single below, and find out more about Seraphic Archer & Cassette via our mini interview.

When and where did you start playing/band form?

Cassette and I are both new independent artists, who decided to collaborate on this new song called ‘Loving You’ to fuse Pop and EDM elements together to establish heart break ear candy! It was a ton of fun to make and we built exciting memories from the whole experience.

My style of music is Pop, but the vibe ranges from tropical to dark which is an interesting blend of creativity and for me it needs to give me goosebumps when I’m cooking up something new.

Cassette is an EDM producer who dives into house music elements and beats relating to synth sounds that is retro-inspired, so he is literally dancing when inventing, it’s the greatest thing to see.

Our musical influences combined are a crazy range of 80’s sounds and others like Michael Jackson, Phil Collins, Nina Simone, Aaliyah, Mya, Taylor Swift…This is just to name a few I am sure if we continued we could go on for quite a while.

What about non-musical influences?

Malala Yousafzai has to be one of my biggest inspirations, readying her story to following her journey with her whole push and the persistence she has toward female education just wow’s me!

Cassette relates and is influenced by Enzo Ferrari, one of his absolute favorites and a quote from him is “if you can dream it you can do it”

Who writes your songs?

I write my own songs, that certainly doesn’t mean I can’t join forces with another creative in the future, but I need to be apart of the writing process or I don’t relate to the music.

Cassette’s focus is the beats he creates as he tampers with instrumentals and has an input for lyrics with artists he works with, which is purposely done to create a united platform for relatable music.

How has your music evolved since you first began playing music together?

This is both mine and Cassette’s 1st song together and we are hopeful that it won’t be the last… When our creativity collides, there is incredible moments bursting to be shared. This is also his 1st music release, which we are very proud of and there will be more to come.

My personal music has evolved since I began releasing music, I feel like it took me forever to find my voice and sound but the more I work on the craft I take the time to educate myself to become better, and then suddenly it’s like fireworks of creativity sparks and I find myself randomly running to find a pen and paper or unlock my phone to quickly start recording my thoughts or melodies.

What are the biggest obstacles?

For both of us, it is learning to adapt with everyone being on virtual platforms, when the face to face human interaction is restricted we often think about how do you remain human in the process…So this creates a bit of confinement in a digital world pretty much on steroids during COVID.

When it comes to our ultimate direction, we both are on a similar but different journey. Breaking down my name Seraphic, it means in resemblance of an angel and Archer, well archers shoot arrows, which is symbolic of a modern-day cupid. Each one of my songs are arrows where I can shoot the message that speaks to uplift and connect with others through emotional energy, which is music for me.

Cassette’s ultimate direction is inspired by his childhood memories to use music in bringing his childhood back to life and do his part to capture 80’s music in a modern style, especially for those who may not have been well-versed within the greatest era according to him (LOL).