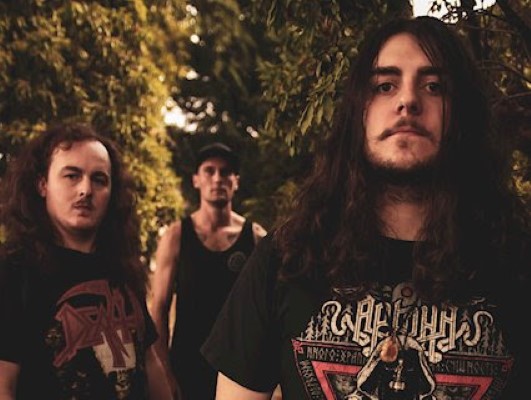 Vancouver, BC-based metal trio, Ysgaroth unveiled their debut album, Storm Over A Black Sea on November 13, 2020. The album features six tracks, including the single, “Sacred”, which has an accompanying music video.

“The release of Storm Over a Black Sea is so many things for us: validation, relief, excitement, and too many other things to say. This album took far too long for us to record and finally release, but we’re beyond excited to finally have it released.

We’re trying to do a lot of things on this record: honour our influences, play some f*cking riffs, and push ourselves as musicians technically and compositionally. We really tried to create something that was greater than the sum of its parts that takes the listener on a journey through different highs and lows, but with songs that can stand on their own, too. Some might think the songs are long-winded, but we think that they’re exactly as long as they need to be. We tried to make something that people could really come back to, and absorb the small details on repeat listens. The lyrics are the manifestations of our own issues with the world: our own regret poisoning us, our consumerist society trapped in capitalism poisoning the world, and religions of all kinds being used as another tool to divide and control us.

And when it comes to influences, we love tons of different forms of music – but at this point, it almost seems like a cliche to make a big statement about bringing non-metal influences into metal, especially as a metal band with prog elements. How many prog bands have you heard emphasize how they’re bringing jazz, rock, or pop elements into their sound, only to release god-awful pseudo-pop garbage? We bring metal influences into metal. Our sound is shrouded in death metal, black metal, and the dark side of 80’s thrash. We’re an extreme metal band, and we’re not trying to be something different. We’re trying to push the bounds of our own sound, but within the realm of music, you could burn a church to. We want to do one thing: play some f*cking metal.”

Check out the album below, and find out more about Ysgaroth via our Five Questions With segment.

We’re Ysgaroth, a progressive extreme metal trio from Vancouver. We’re trying to just make music that we’d like to hear, and if other people happen to like it too, that’s a bonus!

Our music is an amalgamation of so many different subgenres of metal – the three of us have pretty diverse tastes when it comes to metal, and a lot of that bleeds into our music. So we might take inspiration from some classic thrash, or some modern tech death, or avant-garde black metal, which we feel lends our music a bit more variety. As for our writing style, it’s super collaborative – nothing gets put into a song if the three of us aren’t aligned with loving it. Generally our guitarist Kurt will come up with the skeleton of the songs and most of the riffs, and then Shawn (our bassist) and Steve (our drummer) will come up with different ways we can add to it, take things away, and just make it more cohesive.

We’ve more or less finished writing our second album, and we’re on to what will probably be an EP with a bit of a different vibe from our current music.

If you’ve got 17 minutes to spare, Deluge. It encompasses everything we do as a band, and it’s probably our best work. If you need something a bit more concise, our song Sacred is a catchy banger you can delight your family with at Christmas.

“It’s hard to decide on just a few (and not counting bands we’ve played with), but definitely Kataklysm, Beyond Creation, Atavistia, and of course Voivod and Gorguts. Also, the entire Quebec tech-death scene puts out nothing but bangers.”