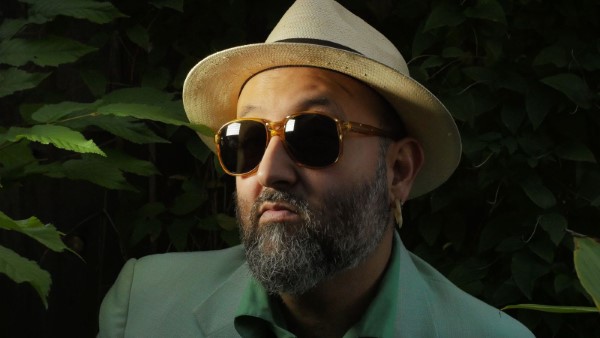 The inspiration for the title Ritmo de lo Habitual came to Mariano during the first confinement when working on the album was the only thing that allowed him to break the monotony of everyday life, the “usual rhythm” of the days.

Being for the most part the result of fruitful collaborations with artists Etienne Lebele, Omar Diaz Herrera, Fernando Pinzon, Ultra K, Stephanie Ozorio and Nagano Morro, the songs that make up this tropi-punk album invite to a psychedelic dance that leaves no one indifferent.

Hi, I’m Mariano Franco aka Papi Chulo. A Montrealer of Mexican origin. I’ve been living and making music and exploring other forms of art here for at least 20 years. I have founded and collaborated with many projects in Montreal. From the first Metal in Spanish band in Canada (Mi Santa Sangre) in the late 90’s to the crazy funky big band Psychotropical Orchestra and now with my solo electro-tropical project, Papi Chulo & su Grupo Invisible.

My music is an eclectic mix of electronic dance music, big beat, funk, and latin american rhythms, specifically cumbia and mambo. I guess is what people call today Global Bass or Tropical Bass. Although I feel the term is too vague. I prefer the term Tropical Futurism or Tropi-punk like my Montreal fellow musicians call my music. Papi Chulo’s music starts with the beat, a rhythmic loop that pop’s into my mind suddenly. Then I seat in my home studio and expand the beat into a whole tune. The bass lines follow and once I got the a rhythmic structure I let myself indulge into synths and other instruments. For this record, I went further and got my friend Etienne Label to record horns and a friend from Panama Omar Diaz Herrera to record percussions. A longtime collaborator, Fernando Pinzon added some bass lines to complete the grooviness and give an organic feeling to the electronic base. All this in the distance because of the Pandemic restrictions.

Papi Chulo shows are just crazy, non stop jumping and moving the hips and heads. For me, a show is really a ritual and I get possessed by the music and the audience’s energy. It is communion where I give all and I take the audience into a frenetic dimension of rhythmic chaos and sweat.

Unfortunately, I don’t know when we are going to be able to perform in Montreal. We are currently in the red zone and before a vaccine comes I don’t see any chance to play live. I’m preparing, however, a live show for digital streaming right after the release of the album. This will come along with a new single and a new music video. I think those are the only ways of keeping your music alive in people’s consciousness. It is hard to be a musician these days, but me and my invisible band, are saving all our energy to party like crazy once this pandemic is over. In the meantime, listen to the record, close your eyes and let yourself go into a tropical journey.

I think my first single, Ritual de lo Habitual, is a good piece to be introduced to the sound of Papi Chulo & su Grupo Invisible. It is easy to digest, no lyrics, just pure frenetic dance music. It is a mix of champeta, cumbia, mambo, and big beat. If it does not make you move, you better go see the doctor.