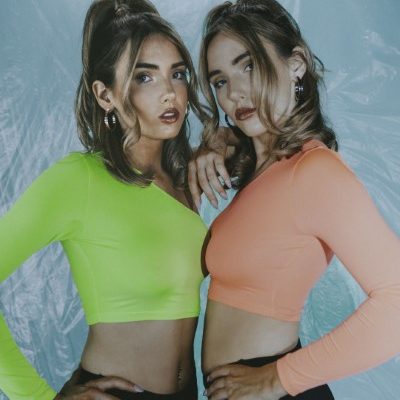 Dynamic female pop duo Fionn is rounding out the year with their latest single, “Space”, and an accompanying music video.

The Vancouver-based indie-pop darlings are known for their euphoric melodies and rich vocals — their 2017 debut single “Skeleton” was a testament to the popularity that was sure to follow them, peaking in the Top 5 on the CBC Music charts. You’ll find their music amongst the most popular streaming playlists — including Indie All-Stars, New Music Friday, and Contemporary Blend. Industry veterans have praised their sound — everyone from Billboard, Exclaim, CBC Music, and Condé Nast.

With their new single and the accompanying music video, Fionn is ready for the next chapter in their career. We caught up with the duo to talk about inspiration, the creative process, and what’s next.

What have you learned about yourselves as artists when you look back at the beginning of your careers to the present?

When we look back, we feel like we’ve grown up so much since we released our first album. Generally, we feel we’ve become more confident in ourselves trying different styles and have had so much fun creating music from all of our favourite genres!

Were there any artists that you gravitated towards when you started creating music, specifically those lush vocals and the indie-pop melodies you’re known for? Did you have any influences that attracted you to these branches of music?

When we first started, we tended to gravitate more towards folk-rock and acoustic artists like Florence + the Machine, Hozier, Fleetwood Mac, and The Lumineers. As we continued in our career, we started finding inspiration in artists like Maggie Rogers, Clairo, Charlotte Cardin, and St. Vincent. Recently we’ve been listening to a lot of feel-good pop music from artists like Dua Lipa, Carly Rae Jepsen, and Maude Latour.

What was the writing and recording process like for you both this year? Were there any factors that impacted the process?

2020 has been a strange year for us all, and Covid-19 definitely has affected how we’ve navigated our releases and written our music. Luckily, we had already finished our latest single ‘Space’ in the studio right before everything shut down in March, but after that, we were a little bit lost wondering how we were going to continue our creative process. Shortly after, we adapted to co-writing over zoom and home studio recording sessions. We are so proud of the songs we have created this year but found co-writing songs over glitchy video calls a bit of a learning curve!

Talk to us a little more about the friction you talk about in the lyrics — when it comes to dealing with communication in a relationship.

Everyone experiences conflict in their relationships, and we have found through personal experience that a lot of negative emotions come from lack of communication. The friction that we talk about in the song is more specifically about when a partner or friend would rather run away from their problems than be straight up with their feelings. We both have always been chronic people pleasers and found that the desperation in this song stemmed from wanting to make all of our relationships perfect, and not wanting to give our partners the space they may need.

What was the process like filming the music video? Can you give us any details when it came to the creation and execution of your ideas?

We wanted the video for ‘Space’ to display the emotional integrity of the song with cool ethereal visuals. Since we started our careers writing folk and country music, storytelling in our writing has always been very important to us. When we were deciding the best way to represent ‘Space’ visually, we both agreed that a lyric video would be able to display the song’s plot and make it clear what it was really about. We filmed parts of the video in our apartment, gave ourselves tears made out of glitter, and spent a night lip-syncing and displaying how we really feel when performing the song.

Is there an EP in the works? What can you tell us about where Fionn hopes to be after the release of Space?

Right now, we are just focusing on consistently releasing all of our new songs as singles, but think that they will all eventually come together as one album or EP. We hope for the opportunity to perform all of our new songs live for our audience again as soon as it is possible again!