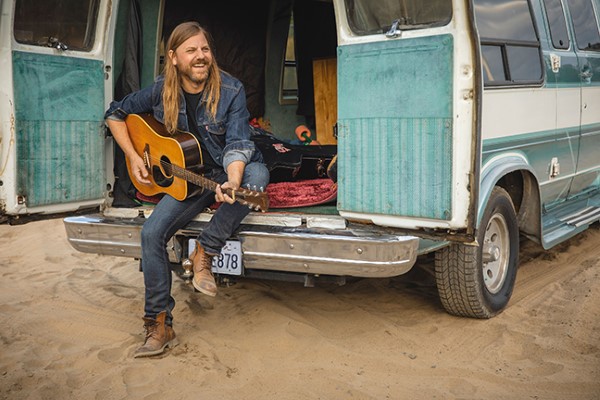 Multi-talented instrumentalist, Steve Hill is back with a video for his newest single, “Rain” off of his latest album, Desert Trip.

“In the fall of 2016, I went to California with some friends to attend the Desert Trip Festival in Coachella,” Hill recalls. “I had an amazing time while I was there and decided to hang around LA a little longer.

“After a couple of days in the city, I felt an urge to move and a need to explore,” he continues. “I rented a camper van and criss-crossed the state for about three weeks.

“I bought a guitar, too, and wrote some tunes at night while camping in Death Valley, Big Sur, Yosemite, San Rafael, and many other wild places.

“The world has become a very different place since then,” Hill considers. “Somehow, though, these songs make more sense to me lately. They’re a journey through my state of mind at the time, and maybe a foretelling of the way I feel now.

“There’s a few vamped-up oldies on there as well,” he reveals. “It’s as if they had been written on the same trip… I hope they bring others a little joy and comfort, too, in these troubled times.”

Check out “Rain” below and find out more about Steve via our Four Questions With segment.

I’m Steve Hill and I’ve just released my 11th album, Desert Trip. I think it’s my best collection of songs so far. I wanted the record to have a mood throughout, to tell a story from beginning to end, like those concept albums that I’ve always loved so much. People see it as a departure from my earlier work which is probably true. It’s folkier than anything I’ve done before. I’ve had a few Country elements in my music before but never like on Desert Trip. And yet there’s still plenty of Blues in there and Rock and Roll too. Although I’ve always been associated with Blues music, I never thought of myself as a Bluesman. I’m a musician. A singer-songwriter and a record producer. My thing is MUSIC. That’s all that matters to me. What it’s called is not something I care about.

2020 has been a pretty weird year for sure but it’s kept me on my toes which can be a good thing creatively. I’ve been doing a lot of online concerts, recording, producing, teaching and basically trying new ways to market my music. So far, it’s been interesting to say the least. Not as much fun as touring but at least I’m still making music and some people still seem to care.

If I’d suggest one song I’d go with Rain. It’s a special one. I wrote it 4 years ago and it seems to keep getting new meanings. Songs are like that sometimes.

My favourite Canadian band right now is The Brooks. They’re a killer Funk band from Montreal. Check em out!