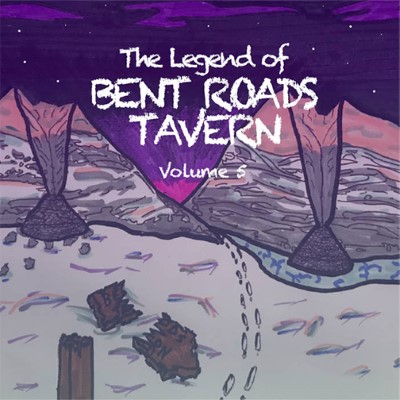 This year, the storied Canadian collective mined their previously unreleased archives to remaster, reimagine and reissue their previous works. The result is The Legend of Bent Roads Tavern, Volumes 1 – 5 — with Volume 5 and stand-out single “Rainstorm” freshly released now!

“The Legend of Bent Roads Tavern roughly follows the chronology of the band’s writing, including early recordings of songs by Christian, Graham and myself recorded in a single marathon session between midnight and 6:00 am,” Middleton shares. “We had just performed three sets at The Gallery, which would end up being the last live performance all seven original members of BRT would do together.

“That recording session was the initiation of The Legend of Bent Roads Tavern,” he considers. “The recordings were very crude, though… Limited microphones and mixing capabilities meant there were so many audio issues that made them virtually unlistenable by contemporary standards.”

The cuts offer a glimpse into the band’s inventive improvisation, inimitable chemistry and communication between instrumentalists, and the raw determination of a band out to capture the very essence of that time in their lives. “Before we were pulled apart by the sands of time and untimely circumstances…” Middleton shares.

Last year, Christian Stokkmo passed away at age 38, which was the second passing of one of the original members; Bradley Dean passed away in 2016 at age 33. “Both before their time,” Middleton regrets.

eeling called to act on their grief, the revival of BRT first sparked in the early days after they learned of Stokkmo’s tragic passing in 2019.

“Word travelled quickly and, within a few days, the five of us decided to pay tribute to Christian by re-recording ‘Sweet Mirona,’ one of the songs he wrote and recorded in UBC Basement Sessions in 2003,” Middleton explains. “It was always my favourite of Christian’s songs, but the only recording we still had of it was of such poor quality that I couldn’t salvage it.”

What was first considered a sentimental re-record and slideshow for Stokkmo’s family and friends soon inspired submission to CBC’s Searchlight competition.

“I felt that submitting it would give it the chance of reaching the widest Canadian audience,” Middleton says. “Although Christian wasn’t born and raised in Canada, I considered him as ‘Canadian as they come’ given how passionate he was about nature, conservation, and kindness towards strangers, family and friends alike.

The result was a mix of remastered reissues paired with a handful of pared-back, stripped-down solo singer/songwriter versions from Middleton, as well as some new releases such as “Fallow” and “West Coast Wedding.” They arrived in Volumes 1&2, 3&4, and now 5.

“With the anniversary of both Brad and Christian’s passing approaching in early November, I wanted to conclude The Legend of Bent Roads Tavern with Volume 5,” Middleton offers. “It features Brad’s bass playing and a recording of Christian’s Monologue, and allows for the chance to really showcase their talents as musicians as well as for us to pay homage.

“This started as a tribute, but with the completion of The Legend of Bent Roads Tavern in sight, I’m realizing this has been a cathartic project for me too,” Middleton reflects. “I have always been so proud of this group and what we accomplished in a short amount of time as a bunch of misfit minstrels at school, away from home, and belonging together in Vancouver.

“We found brotherhood in each other and I realized that one way or another, I needed to put this project together and out there. These songs have been stuck in my head for so long, I needed to ‘finish’ them — we may have started in 2001, but The Legend of Bent Roads Tavern Volumes 1 – 5 are the first official and commercial releases we’ve ever put out into the world as that band.

“With the support of Bent Head fans that have come out of the woodwork and who share those memorable live music experiences with us all those years ago, we’re inspired to continue working on our original music,” Middleton forecasts. “We got together in 2001 and now we’re catching new listeners up on the history of what we think is one of the most elusive corners of the Canadian music and cultural landscape.”

Check out the lyric video for “Rainstorm” below and be sure to stay up to date with Bent Roads Tavern via their socials.