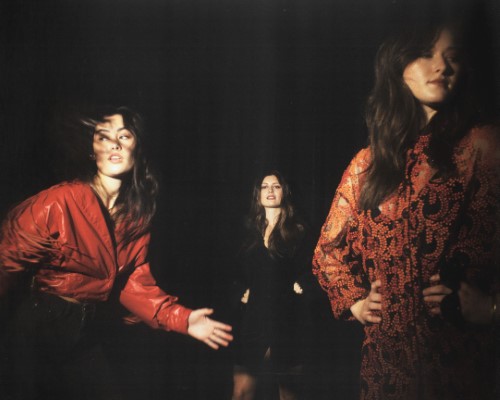 There’s nothing quite like the musical prowess of a “family band” and it’s quite clear from the get-go, the passion of Vox Rea goes back generations. Combine two sisters, one lifelong bestie, & a college pal and you get a combo of history, hard work, and the honesty that far too many artists are missing out on.

Your debut single, “Dose Me Up”, was written on your (Kate & Lauren) grandmother’s piano, which I imagine flooded you with so many memories of growing up. Was music always a big influence for you, even in your younger years?

Our grandma was a piano and choir teacher so music was a central part of our lives growing up. She used to look after Lauren and I when our parents were at work and she taught us to read and to play classical music. There was a continuous soundtrack of nursery rhymes, musicals, Bach, and The Beatles playing in our house on those days. From an early age music was always our favourite way to pass the time and that’s never really changed.

The single has such an epically “dreamy” groove to it with beats that hit the listener just right. Is this vibe a significant departure from the music you previously made as The Katherines? What influenced the band changes?

I love that description.

It’s still us so there’s always going to be a common thread but the new music definitely feels like its own thing. Throughout the transition from The Katherines to Vox Rea we took a lot of time to introspect and figure out who we are. We wrote the album all over the place – in apartments in Toronto, Boston, LA and Berlin, at a writing camp on Pender Island, at home at our grandma’s piano – then we took the strange collection of songs and spent a week holed up in a studio in the snowy forests of Quebec making a record. The vibe feels more curious and cohesive.

Can you further expand on your website’s tagline “Vox Rea is written for you; this is not a product”?

We’ve spent a lot of time thinking about what it means to be an artist. We live in a world where success often looks like commodifying yourself, artists are expected to be these corporate mannequins and product peddlers, and art has to have a price tag. But that all feels so far from what music actually means to us, you know? We’re not thinking about selling or buying anything when we make music. Art isn’t made in a factory. So yeah, the tagline is just about our philosophy when it comes to art.

Being such an introspective group in your approach, how would you say the current state of the world has influenced your writing/promotion of your music

It’s changed everything. It really feels like there are no rules these days. We don’t feel bound by the previous structures of the industry and we’ve approached this project with total creative freedom. I guess you could say that the silver lining of the apocalypse is the permission to start building things back up the way we want them to be… to create the world we want to live in.

Any plans for the next six months?

But real talk – the ‘Dose Me Up’ music video is out and we have a new single coming out on November 20th!