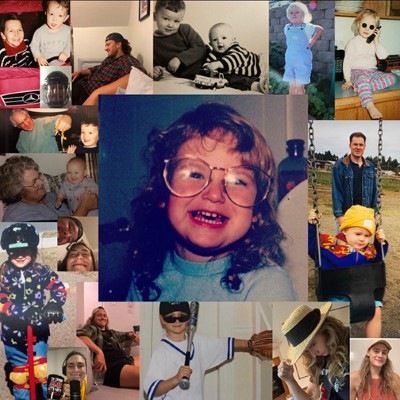 Canadian trio, thechroniclesofcure is made up of bandmates Claire Warren, James Feschuk, and Camille Irvine. The three released their debut album, Social Distant Story Book in April 2020, with a mission of making great music and donating to a great cause: providing elderly residents of long-term care facilities with technology to stay socially connected during COVID-19.

“We didn’t really know each other at all beforehand,” Irvine says, “but we ended up having a really fun time working with each other.

“We found that sending each other tracks back and forth was the best part of our socially isolated weeks.”

With that, the album’s process shines insight on its ultimate title — Social Distant Story Book.

“It’s our story of how being in isolation doesn’t mean you’re alone,” Irvine explains. “It’s that, although we can’t meet in person, we can still create and connect with one another.

“The privilege we have had making music virtually, however, is something not everyone is able to do,” she continues. “Not everyone has access or know-how for using technology to connect — especially the elderly.

“These vulnerable populations are experiencing severe isolation, many without consistent access or ability to use technology, so by donating our streaming revenue and additional contributions raised from our website, we hope to translate the privilege we’ve had to make music into providing the elderly with access and ability to connect with their loved ones.

Check out the lyric video for their newest release, “Playground Fantasy” below, and find out more about the band via our Five Questions With segment.

Clarie: I’m Claire Warren and I’m from Halifax, Nova Scotia. I write the lyrics and do the vocals for Thechroniclesofcure

Camille: I’m Camille, sometimes I go by Cam or Cam-el, and I do a lot of the producing, mixing, and instrumentals for Thechroniclesofcure.

Claire: Honestly, our music is so much about us just having fun trying out different sounds and growing as musicians more than trying to stick to a signature style. When Camille and I first got in touch about collaborating, she had such a clear vision for our first song (Playground Fantasy) to portray when you heard it. That made it so much easier to get in my own head when writing, and she really gave me the creative freedom to really be myself lyrically. I try to write like Noah Gundersen and Asgeìr. Noah has a way of painting bleak or dark pictures really beautifully, and he really encompasses storytelling in songwriting well. Asgeìr is a little different. You can tell he’s just a poet through and through, and he’s probably the musician I try to emulate the most when I’m writing and singing.

Camille: I have to echo what Claire said…we came together through an Instagram story I shared, looking for people to make music with. I have to say, I feel pretty lucky to have ended up forming a band with two of the easiest going, genuine, and caring people.  We are all so open to each other’s ideas, so much so that no idea is a bad idea. I think this leaves a lot of flexibility for what our music ends up like, since when ideas are presented by one of us the answer is never “no”, but instead “how”.  Each song we’ve written has been a reflection of how one of us was genuinely feeling at that point in time. Our EP is just a collection of moods and experiences, so it’s hard to say what kind of music style we fit under, we’re kind of all over the map. But again, I would say that depicts who we are as a band quite well.

What are you spending your time on during the Pandemic?

Claire: I actually just moved back to Ottawa to finish up my Master’s and finally got to James in person for the first time since we made this album. We mostly just jam together, trying to write new pieces or get help finishing older ones, but we also have been just going on hikes and being outside. He’s such a fun personality to be around, and it just makes me want to drive out to BC and pick up Camille so we can just hang out and jam all the time.

Camille: I am also doing my Master’s, but in philosophy, where my research is focused on end of life care. I spend a large portion of my days on zoom meetings/ doing schoolwork.  At the end of my day, grabbing the guitar or playing around on the drums is when I get to feel at ease. It’s a cool experience to have so much creative energy isolated to one part of your day, it’s like all the moments building up to that jam sesh, makes my music writing process that much more euphoric.

Claire: Oh god, definitely Playground Fantasy. We made the whole thing entirely with voice notes. It was such a cool moment to hear the final product and go “wow, you really DON’T need a whole lot to make music. You just need to hit record.” That was the first time I ever recorded something and put it out there too, so it’s doubly special for me

Camille: I’d have to say Artificial Nostalgia, it’s just such an instrumentally clustered song, at times we have 40 different tracks playing in that song!  It shows a bit of all of us in it and really captures the ‘having fun’ aspect of who we are as musicians

Claire: I love City and Colour, and Dallas Green will forever remain an inspiration to me, but two Canadian artists I love right now are Erez Zobary and Frank Mighty’s Hotline. Erez is maybe the most talented musician I’ve ever met in my life. She sounds like Amy Winehouse re-incarnated. Plus, her development as a songwriter has been awesome to follow, with her most recent track, Summer, being my favourite to date. Frank Mighty’s Hotline is relatively new, but John (Traboulsi) and I used to jam in his living room when he was living in NS. He’s really been like a mentor to me, and I’m so excited to watch him take off as he has. His song “When Else” is my personal favourite, which has all the characteristics of a trademark indie banger: Killer hook, amazing guitar, and just overall positive vibes

Camille:  Lately I’ve really been listening to Wolf Saga, I absolutely love his song “Heroes”. His ability to merge electro-pop to such meaningful and powerful lyrics is an inspiration to me as a songwriter and producer. As for rock inspirations, April Wine, Trooper, and Heart are huge inspirations for me, they’re bands my parents played for me growing up and weigh heavy in my heart for that reason.