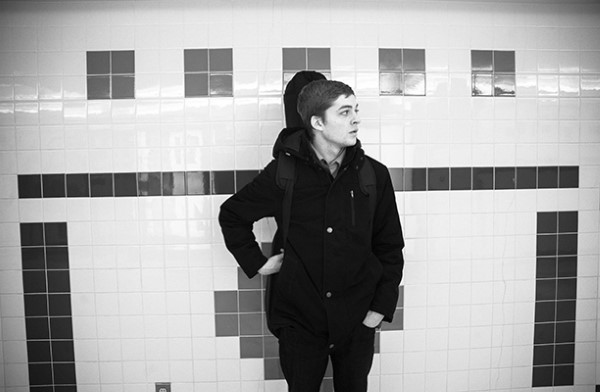 The video is a live pull from Eatman’s EP release party at Peppers Pub and quickly confirms why the Saint John, New Brunswick-based artist has been a fast-rising fixture on the local scene; his distinct alt-folk style rich with melody and charm draw from the likes of his inspiration from John Prine to Jack White, while remaining decidedly all his own.

“‘Walking Paranoia’ is one of my personal favourites from the album,” Eatman shares of the introductory six-track EP. “This album started out as a wedding… Well, that is to say it started as a wedding invitation.

“I had toured as an opener with The Adam Washburn Band and, after a set in St Andrews, the bass player — Keith Whipple — mentioned he had really enjoyed my style of songs,” he continues. “He mentioned he was getting married soon and asked if I would play my songs for the reception.

“I had assumed it was a drunken promise and he had no intention of following up, which was one of many false assumptions I would make throughout this process… Fast forward a few months, I’ve played the wedding, and Keith reached out to tell me he’s building a studio with his friend Derek Hilchie and would love to have me as their first recording artist.

“The next few months proved far more strenuous and transformative than I had assumed,” Eatman recalls of the recording process. “From the start, I knew who I wanted to play on the recording — throughout my years of playing in bars and meeting fellow musicians, I had found kindred spirits that would add the necessary meat to the bones of songs I had written.”

Check out the video below and find out more about Austin via our Five Questions With segment.

To figure out where I started, it’s a bit hard to pinpoint. But I can tell you I was inundated with music from the get-go.

My Mom, an avid Beatles fan, my older brothers preaching the tenants of musicianship from Leadbelly to Meat Loaf, to my Dad faithfully retelling the stories of John Prine and Matt Minglewood on his guitar.

Not to mention my extended family, my cousins, my uncles and aunts could all play and sing.

Music was always playing in my life, often without my realizing it, but its absence would become a driving factor later on.

Truth is, my whole family, growing up, had a singular focus… music.

I didn’t inherit this focus initially. It wasn’t until I was called upon at a family bonfire to play a song, did I realize I was so behind. Not just within my family, but myself.

I spent three months learning Bob Marley’s “Redemption Song” and Sublime’s “What I Got” to play the next time.

All of this is to say that when I did get called upon again, I was ready to impress, and with a baker’s dozen of white russians in tow, on my 19th birthday, I got that chance at an open mic.

From there, I began a life of ferrying (what I hoped) was good songs in a three hour set at the bar I worked at. I kept that going for a couple of years, honing my craft, until I got disenfranchised with just echoing good music.

Determined to add something to the medium that had given me so much, I began writing my own music.

Stylistically, I took the moniker of Alt-folk. I heard a couple of quotes about folk music that I really liked;

I don’t think my music would be considered folk in a traditional sense, but based on that criteria, I was comfortable with kind of adopting it, hence, Alt-Folk.

A lot of my writing on the EP was autobiographical, like on “The Spark” but As time goes on, I’ve learned to adopt an informed approach, mixed with my own style.

Well… I really can’t express enough how lucky I am to be in a zone where limited live shows are possible right now, and I’m extremely proud of how the venues I’ve played at are handling it.

I’m always writing down song notes and ideas on my phone or recording little tidbits of hooks, so I have this catalogue of music I’m hoping to put out there eventually.

Luckily when they extended the family bubbles, the whole band put each other at the top of the list and we were able to get together once a week. It was those practice sessions that informed the tracklist for recording a double-length album.

But before, when the quarantine first hit, it was definitely a blow to the creativity. I went from having a guaranteed 3 hours a week to nothing. So to keep me well-practiced and incentivized I started live-streaming from my Facebook music page.

It’s been good but it’s not a substitute for live performance and I don’t pretend to speak for all musicians but we tend to rely on interaction from the audience, it really does mean a lot.

The virtual thumbs up pales in comparison to a hearty slow clap.

Right now, mostly just crossing my fingers and knocking on wood for a return to normalcy.

But really, we’re working on a double-length album, hopefully out for the new year.

It’s been keeping me pretty busy, between working a full-time job as a line cook, playing limited live shows, live-streaming, recording, and of course trying to get my name, and more importantly my music out there through publications like this.

Self-promotion was never my strong suit, so I really appreciate being given the opportunity to reach a larger audience, despite not being able to physically go anywhere. I think musicians especially will need to rely on digital marketing more than ever to try and break through the noise out there.

The rest of my time is spent listening, trying to discover new songs/bands to add to my ultimate playlist, keeping up with the news, and running a Star Wars-themed D&D campaign.

Because like most people, I watched everything on every streaming platform already throughout quarantine…

I’ve been rattling my brain about this one, but general consensus seems to lean towards “Perpetual Fire”.
It’s a song from my EP, “Broken Radio” and I think it does a good job of exploring the breadth of my music style in general. There’s a lot of witticisms and wordplay thrown in there with the catchy bits, something I tend to do a lot of in my music.

It’s also the song I toyed around with the most in the studio. Things like adding the slide guitar at the end, made with a nearby glass water bottle on the fly.

So yeah, “Perpetual Fire” is my choice for now.

We’ll see how the next album turns out. I feel like it will have some contenders on it.

In no particular order:

I’ve tried to keep my list to bands I’ve seen play live because I think that’s where you truly find the caliber of an artist. Which makes the lockdown extra disheartening, necessary, but disheartening. Most of the artists are on indefinite hiatus right now, but you can still find their music out there in the wild Canadian wilderness, or Spotify…

I’d also be remiss if I didn’t mention the Sam Roberts Band and of course one of my songwriting heroes, Gordon Lightfoot.

I haven’t seen them play live yet, but I hope to someday soon.