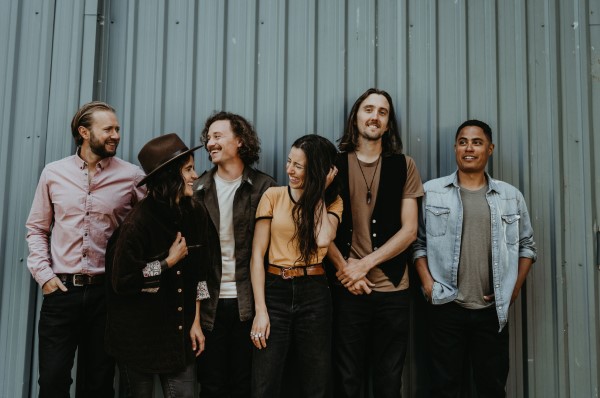 After a year-long writing and recording process, Carmanah has released their highly anticipated sophomore album Iris. The west-coast alt-folk group teased their fans with the album’s first single “As I See You” earlier in the year and it quickly climbed the NACC singles chart.

Carmanah continues to blend the lines between roots, blues, and rock music. Their debut 2018 single “Roots” climbed to No.30 on the commercial rock charts, hit #1 on CBC Music’s Top 20, and earned full rotation support on Indie88, The Zone, Sirius XM, and CBC Music. When they weren’t climbing the charts, they were scoring live gigs alongside Ziggy Marley, Hey Ocean, and KD Lang — additionally, playing numerous festivals throughout the year.

With the release of their new album Iris, we caught up with the Victoria-based rockers to find out more about their story and creating new music in a pandemic world.

Obviously, this year has been drastically altered for performers and creatives — specifically for indie artists relying on live shows to promote their work. What can you tell us about how the band has navigated the current musical landscape?

When it became obvious that the pandemic was going to derail our summer touring and our album release we had to slow down and create a new trajectory. Originally we were going to release our album Iris in the late spring but we instead decided to release a few singles throughout the summer, with the full album being shared on October 2nd. We turned our attention to creating additional content, like music videos, and doing some livestreaming. Essentially, we had to find ways to still be creative even without live shows and without touring. The music biz is still upside down, and likely will be for quite some time, so we just have to remain flexible, creative and committed, while also taking this time to do other things in our personal lives to stay sane.

Earlier this year, you released the first taste of the new album with the single “As I See You” and it earned nearly 100K streams and quickly climbed the Top 20 NACC singles chart. How did it feel to see that incredible response, especially because it was the first song you’d released in over a year?

It was awesome to know that As I See You was being so well received. And since it was the very first tune that we shared off of Iris we were particularly stoked for the positive reactions. Releasing new music always feels a little vulnerable. You spend so much time with these songs, from songwriting to producing to recording, and when it finally comes time to let them go off into the world it can feel like you’re sending a chunk of yourself out there to forge its own path. We’re grateful that our little musical babies seem to be doing pretty well.

What was the evolution process like for creating Iris? Was there a consensus on the themes and sounds you were going to experiment with? Or did the ideas change as you began writing?

After touring our previous album, Speak in Rhythms, for some time I began working on a new chapter of songwriting with the goal of creating another full-length album. I wrote these tunes alone and brought them to my bandmates when it was time for some collaboration and for their creative touches. We decided to team up with producers Gus Van Go and Werner F. again and joined them at their studio in Brookly, NY last summer (2019). We got a little edgier and a little more sultry on Iris. Most of these tunes were written in-between touring when downtime was precious and my fingertips could wander on my guitar while I worked through thoughts about life, love, and balance. I hope the finished collection invites listeners to dance, sway, swoon, and reflect…all in one place.

You’ve toured and performed with a plethora of artists and nabbed multiple festival spots over the course of your career — when full-time touring is back and we can all attend live shows again, are there any bucket list venues or acts you’d love to work with?

Aaaah I can’t wait. Hmm we were originally booked to perform at Edmonton Folk Fest 2020 and I really hope that we can make that come true one day. We also hope to return to Kaslo Jazz Etc. Festival (one of the BC’s finest!). Other festivals I’d love to see Carmanah performing at one day include: Osheaga, Calgary Folk Fest, Winnipeg Folk Fest, CBC Music Fest, Artswells (Wells, BC), Edge of the World (Haida Gwaii), Pickathon, Vancouver Folk Fest…so many.

We are also planning on doing a full cross-Canada tour in our new (old) tour bus – a 1972 GMC Greyhound that runs on used vegetable oil and can sleep all of us comfortably. It’s almost finished and it will be raring to go… once we can. I have a lot of family in Atlantic Canada whom I’ve been promising for quite some time that we’ll be returning to the East Coast. I can’t wait to fulfill that promise and play music all the way to Newfoundland.

Many of our readers will likely be experiencing Carmanah for the first time with this new album. What do you want to communicate to those new listeners about your story as a band, and the stories you tell as artists?

We are six pals living in Victoria, BC (on the territory of the Lekwungen/Sonhees, WSÁNEĆ Esquimalt peoples) and we love and cherish the west coast. I believe art can be a catalyst to create joy, change, and a better world. In particular, I hope people enjoy the lyrics, the beats, and the sonic thought that went into creating Iris. We had a lot of fun making an album that incorporates a few different twists and turns. I hope it makes people feel encouraged and uplifted, while also inviting them to challenge themselves and the busted world around us.